Prices for Rogers Share Everything Plans in Manitoba just became more expensive, as the company has raised select plans by $5 per month, reports MobileSyrup.

Internal documents reveal the 2GB plan has been replaced by a 2.5GB data bucket, coming with a $5 increase across the board for BYOD, Smart Tab and Premium Tab options.

New is a 1GB plan starting at $45 per month for a No Tab BYOD option with Local Calling, but going up to $60 on Premium Tab. The most expensive plan right now is the 15GB plan for $95 on a Premium Tab.

All of the changes can be seen below: 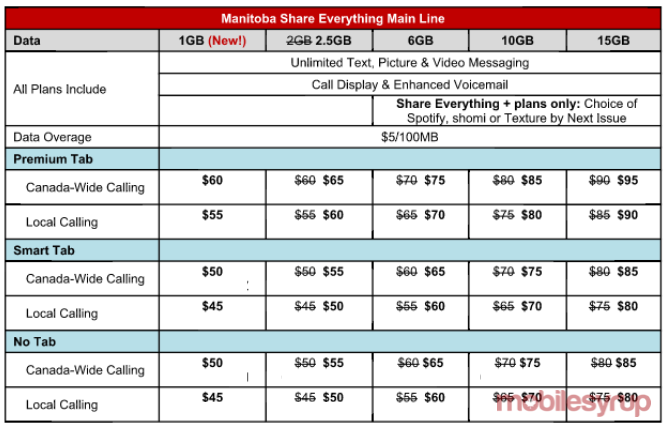 Earlier this month, Bell announced it would acquire regional carrier Manitoba Telecom Services (MTS), which many believed would signal the end of competitive pricing in the province, as it meant one less wireless carrier to compete against the Big 3.

Rogers appears to pre-empting its rivals in Manitoba by hiking prices up first before anybody else. You can bet Bell and TELUS will follow shortly #justbecause.