Just under a week ago it was revealed Rogers was set to launch Share Everything pricing and yesterday amidst Apple’s iPhone 5s and iPhone 5c hoopla, the company officially launched their new plans.

We’ve seen other carriers like TELUS launch similar shared plan structures with their SharePlus plans and now Rogers customers can also join in on the fun. All plans include unlimited Canada-wide calling, SMS/MMS, caller ID and Voicemail Lite.

The plans are listed below–note the 1GB and 3GB plans right now have a promo with double the data (TELUS added a similar promo yesterday for its 1GB-3GB plans). 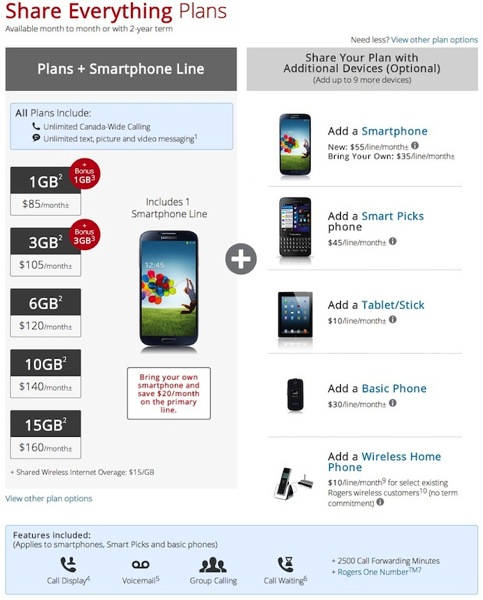 Unlike TELUS, there are no 250MB, 500MB or 2GB data options available; there is a new 15GB plan for $160 per month, however. Let us know if you are going to be switching to these new Share Everything plans. Promo video below:

Update from Rogers on the highlights of their new plans:

With Share Everything, Rogers customers can add up to 10 wireless devices to their plan, which is twice as many devices as other Canadian carriers. Customers can add smartphones, basic talk and text phones, tablets, as well as the Rocket stick, hub and mobile hotspot. Wireless Home Phone can also be added in select markets.

As well, our Share Everything plans include basic talk and text phones, which means you can share unlimited Canada-wide talk and text, call display and voicemail without sharing data. Our plans are the only ones to offer this type of flexibility.