Rogers looks to be expanding its plans with new ‘Share Everything’ pricing, coming September 10, according to an internal doc, reports MobileSyrup. Essentially the new pricing model will allow customers to add various devices (such as another smartphone, tablet or basic phone) to their plans to share data usage; up to 9 devices in total can be added.

Customers will first pick a smartphone plan, which all include unlimited Canada-wide calling, SMS/MMS, caller ID and Voicemail Lite. These are the same plans Rogers introduced when they revealed two year term pricing, except with the addition of a 15GB plan which will cost $160 per month.

Once a plan is chosen, there is a ‘Device Connection Fee’ applicable to devices added, ranging from $10 to $55 (the same prices as TELUS), as seen in the chart below: 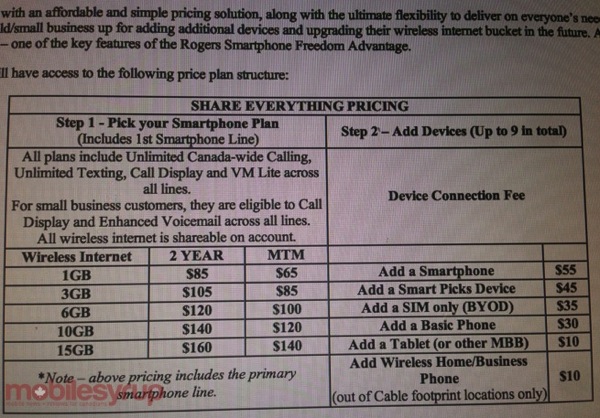 With the impending launch of ‘Share Everything Pricing’, Rogers notes all Talk & Text Family/SmartTeam plans will expire at midnight on September 9. Existing customers can stay on these plans and will not be forced to switch plans.

Let us know if you’ll be jumping on this new pricing structure.