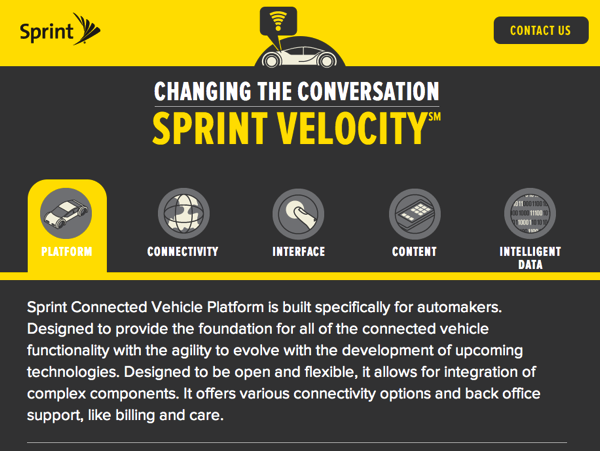 Rogers and Sprint have announced plans to get your car connected, as the Sprint Velocity infotainment system installed by various auto manufacturers will use the Rogers wireless network.

“Canadians want to be connected from anywhere, at any time, and with over twenty million vehicles on the road in Canada there is a strong growth opportunity for Rogers in the connected auto segment,” said Mansell Nelson, Vice-President, Advanced Business Solutions, Rogers. “Sprint Velocity will bring to Canada the ultimate connected car experience on the road, with a combination of smartphone, tablet and in-dash capabilities, while also delivering safety features and communicating vehicle maintenance information seamlessly to manufacturers.”

Rogers confirmed to the Canadian Press the service will become available next year. New cars will be equipped with a Machine to Machine (M2M) SIM card for wireless connectivity to the Rogers network. Vehicles in the USA already have access to the Velocity system.

At the 2013 New York Auto Show, Sprint explains more about their Velocity system:

Here’s a demo of what the Sprint Velocity system can do–and yes it will connect to your iPhone:

What do you think about the Sprint Velocity system?