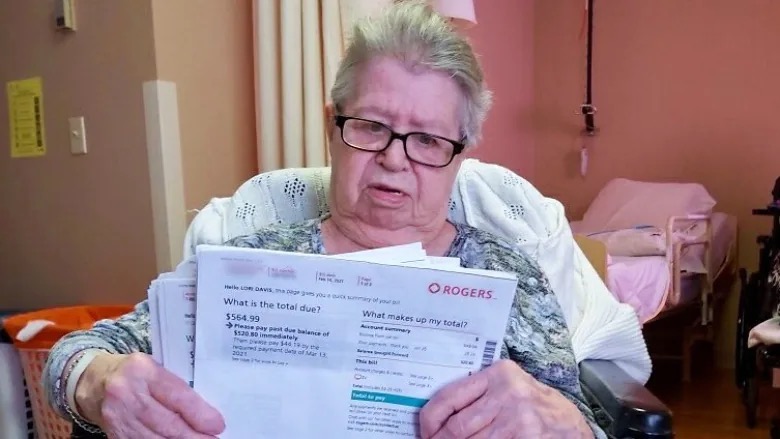 During last year’s COVID-19 lockdown, the family of 91-year-old Joan Davis cancelled her Rogers phone and internet services at her Ottawa long term care home, in May.

According to Joan’s daughter Lori, the family was told by Rogers a technician would pick up equipment, but that wasn’t the case. Rogers ended up sending a $450 bill to the Davis family, for unreturned equipment, which nobody could retrieve due to the coronavirus lockdown.

“Rogers had no room for consideration or compassion,” said Lori, who lives in Kingston, Ontario, to Go Public. “It’s not about people, it’s only about profits.”

Despite numerous attempts to explain her mother’s situation to Rogers, the company repeated its stance to return the equipment or pay the equipment penalty. This was despite the fact the long term care home was on lockdown with 30 COVID-19 cases, including Lori’s mother.

“I went for six months before I could touch my mom with a rubber glove on my hand, not knowing if she was going to actually make it or be like the other residents that had passed away,” explained Lori, who says Rogers lacked “humanity”.

Lori says Rogers also cancelled her mother’s basic cable, despite the latter being paid for.

Rogers, after being contacted by Go Public, waived the charge. The company also apologized and provided Joan with three months of cable TV for free.

“As we looked into Ms. Davis’s experience, we found that as a result of the pandemic, our process for returning equipment doesn’t reflect the challenging circumstances many of our customers continue to face in these times, including lockdowns in long-term care facilities like hers,” said Eric Agius, chief customer officer at Rogers, in a statement to Go Public.

The CBC Go Public story also documents the story of Bell customer Ben Wilkinson from Toronto. COVID-19 caused him to close his live music business and he was on the hook for internet and landline cancellation fees, totalling $1,000 because of automatically renewing contracts.

While Bell waived the $500 cancellation fee for internet, it would not budge for the landline.

Wilkinson said he asked Bell to waive the landline fee as well last month, but they refused. “They said, as a matter of course, currently they are not doing anything for any customers of theirs that had to close or change your business plans to the pandemic. I feel like they’re screwing over the little guy. Taking money where they can,” explained Wilkinson.

Bell told CBC Go Public would be reaching out to Wilkinson “to see whether there are any other ways we can further assist him.”

Yesterday, Rogers announced it plans to acquire Shaw in a $26 billion deal, a move it says will accelerate 5G networks in western Canada and also create 3,000 jobs.

Rogers today announced its unaudited financial and operating results for the fourth quarter and full year ended December 31, 2022. Overall, Rogers reported a total of $4.16 billion in revenue for Q4 2022, up 6% year-over-year from Q4 2021. Quarterly service revenue was also up 6%, to $3.43 billion. For the entirety of 2022, Rogers posted...
Nehal Malik
10 hours ago