Today, Rogers launched a new data sharing option for customers that have the 6GB data plan. It will cost $30 extra per month, per device to share your existing 6GB/$30 data plan with up to five devices. But first, some history.

With the launch of the iPhone 4, Rogers released their famous 6GB data plan. Along with the 6GB data plan, Rogers also launched a data sharing option that allowed iPhone owners on the 6GB data plan to share their data with an iPad. This service cost an extra $20 + GRRF per month and the promotion expired in September 2010.

It was unreasonable to pay extra to share data you had already paid for. This has resulted in the popularity of jailbroken apps such as MyWi.

As Rogers entered Holiday 2010, the company launched three new Data Shareable Voice & Data Plans and three new standalone data sharing options. To share these data plans with an iPad, for example, it cost an extra $15 + GRRF per month (now $10 until May 2, 2011). Some would say this is robbery. 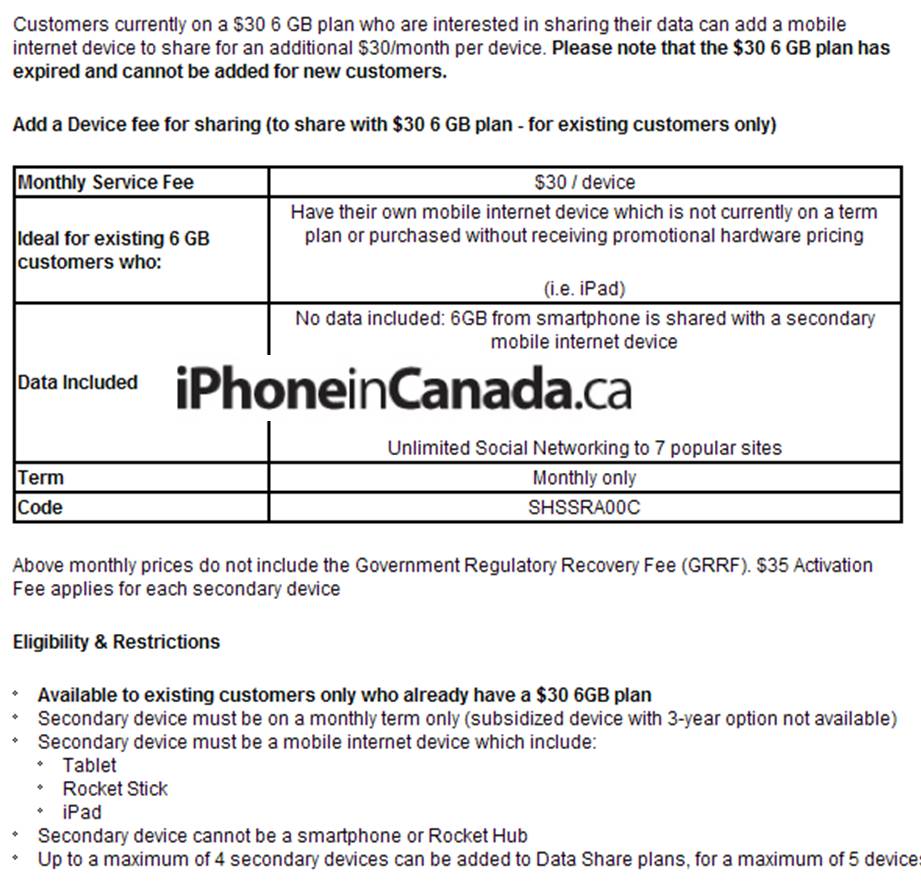 Get Ready To Pay An Extra $30 Per Month

If you have the 6GB data plan from Rogers and want to share that plan with an iPad, for example, you must pay an extra $30 + GRRF per month, per device (for up to five devices) on top of your already $30 + GRRF 6GB data plan! And don’t forget the $35 one-time activation fee per device.

Let’s break this down with an example:

Is Rogers preparing to charge for the use of Personal Hotspot?

In January, we were chatting with Rogers via Twitter about bringing Apple’s new iOS 4.3 Personal Hotspot to Canadians.

While the feature will come, whether Rogers likes it or not, the control that Rogers has is choosing whether or not to charge us. We have yet to get a clear answer about being charged.

If these data share plans are any indication of what’s to come, expect to pay $10 – $30 per month extra–to share your data plan with Personal Hotspot.

Will that happen? We don’t know–but the infrastructure is there to charge us extra fees.

Will you be paying $30/month extra to share your 6GB data plan?

The Rogers Preferred Program (RPP) offers corporate members and organizations a discount for their employees, and the latest promo for September 2022 is offering a $50/month Infinite plan with 40GB of data. According to iPhone in Canada readers, this $50/month plan is normally $75/month, so you’re saving $25 every month. The discount is available until […]
Gary Ng
1 week ago