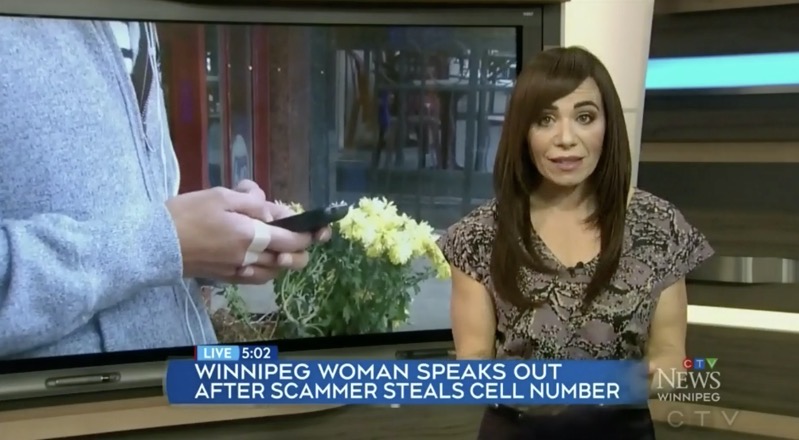 The latest scam hitting Canadians is cellphone porting, when fraudsters impersonate you and are able to port out your number through your wireless carrier. Once your number is taken over, any accounts linked to your cellphone number can be used to reset passwords, resulting in your digital identity being compromised.

According to CTV News, the latest victim of this scam is yet another Rogers customer, this time a woman named Meaghan Ranson from Winnipeg, Manitoba.

The scenario plays out the same as before—victims receive a text message from Rogers stating there was a request to port out their number to another carrier, and to contact the company if this wasn’t authorized.

Ranson believed the text message was spam and ignored it. That turned out to be a mistake, as a few hours later her phone lost service. She contacted Rogers and the company informed her the account was cancelled and she was a victim of fraud, with her number ported to Bell MTS.

CTV News reports Ranson’s online identity was quickly taken over by fraudsters. Rogers told her to change her passwords and banking info, while also made a request for a new number:

Rogers told Ranson to change all of her passwords immediately, including social media, emails and banking information. Rogers also requested a new number for her.

But even after the passwords on accounts had been changed, Ranson said, the fraudsters had already racked up $700 on her credit card, had ordered a number of items online to an address in Quebec, and still had access to her emails.

According to Ranson, Rogers put a new “fraud protect” plan on her account, which only lets someone port a number if photo ID is provided. This feature is not standard for Rogers wireless customers and Ranson says it should be enabled by default.

“I don’t know how they are hacking into phones, but I feel like when (phone companies) get a request to port your number out – they should have to talk to you, have photo ID, all that stuff,” said Ranson.

Ranson says Rogers got her number back the next day, but the ordeal resulted in her Amazon password being reset by hackers and also her email taken over. Her credit card company removed the fraud charges.

According to the Canadian Wireless Telecommunications Association (CTWA), the lobby group representing wireless carriers in Canada, to prevent online porting fraud, do not publish your personal info on social media and keep an eye out for porting text messages from your carrier. Any devices lost or stolen should be reported to your carrier.

We last heard about a Rogers customer falling victim to this “porting fraud” last week. Another case was reported in late January, plus others in December and another in November.

Yesterday, Telus and Koodo announced they were waiving long distance and roaming charges to Turkey and Syria, following two devastating earthquakes affecting both countries. Rogers/Fido and Bell/Virgin Plus have also announced they are waiving long distance calls and texts sent from Canada to Turkey and Syria. Update Feb. 8: Rogers told iPhone in Canada in […]
Gary Ng
23 hours ago