For Mother’s Day happening this Sunday, SaskTel says it expects another busy day in Saskatchewan, due to the growing popularity of mobile devices.

SaskTel says it expects customers to send 10.2 million text messages on Mother’s Day, which is Sunday, May 13. Other projections estimate 105,000 gigabytes of wireless data usage, equivalent to streaming 35,000 hours of HD video in one day (do you even FaceTime?).

“Our networks offer customers a number of ways to connect with their loved ones,” said Doug Burnett, SaskTel Acting President and CEO, in a statement. “With many families spread across the province, country and globe, we understand it’s not always possible to get together. So, it gives us a great sense of pride knowing that what we do allows our customers the opportunity to catch up with mom on her special day.” 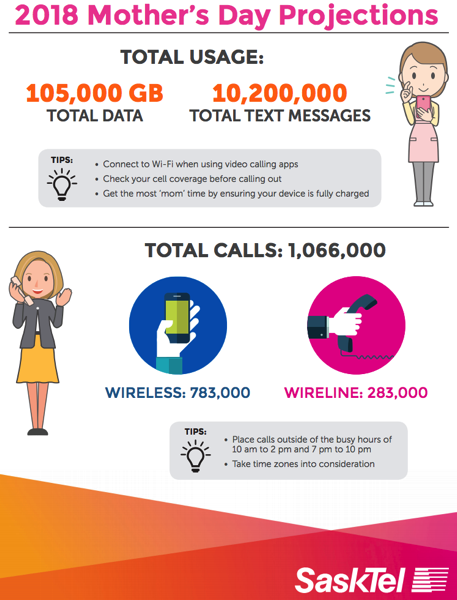 Despite wireless usage growing, SaskTel still expects landline calls, with estimates of over 1.06 million calls this Sunday, as the company’s networks will see yet another one of their busiest days of the year.

The Canadian Radio-television and Telecommunications Commission (CRTC) wants feedback from Canadians on the proposed price increases on basic TV packages, beyond mandated price caps. The CRTC said on Wednesday the request for comments comes “in response to an application filed by a group of television service providers to increase the price cap for the basic […]
Gary Ng
2 hours ago