SaskTel has launched new monthly wireless plans ranging from $60 to $100 per month, with the latter offering unlimited everything including data. Below are the new plans: 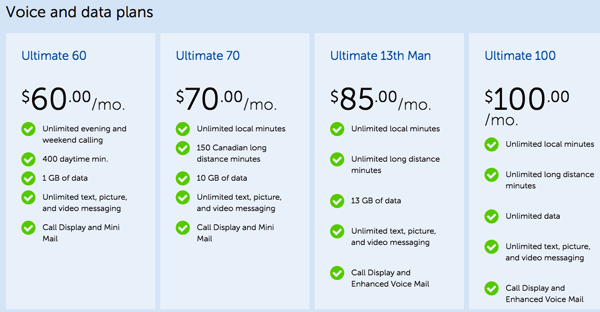 SaskTel has some fun describing its new $85/month plan: “Just like the extra player on the bench, the Ultimate 13th Man plan gives you everything you need — unlimited talk and text, plus bench support with 13GB of data.”

For those outside Saskatchewan on the ‘Big 3’ (aside from Quebec and Manitoba), to get a plan with 6 GB of data costs $140—whereas here for $85 you get 13 GB. Wireless competition is alive and well, folks (if you’re lucky to be in a province with a regional carrier that is).

SaskTel recently admitted it may not be eligible to bid for set-aside airwaves in the upcoming AWS-3 wireless spectrum auction due to its high provincial marketshare.

Let us know if you’re going to be switching to any of these plans.