The Canadian National Exhibition (CNE) kicked off today in Toronto, as “The Ex” goes from August 18th to September 4th, offering rides and games, food, entertainment, shopping and more.

For those looking for a deal on a Freedom Mobile plan, the company is offering an exclusive 25% off discount on their Big Gig + Talk 10GB plan, on top of the company’s ongoing 3GB data bonus for 24 months, taking the $60 plan down to $45 with 13GB of data (10GB + 3GB bonus).

An image of this promo was shared by a user on RFD who visited the Freedom Mobile booth at the CNE: 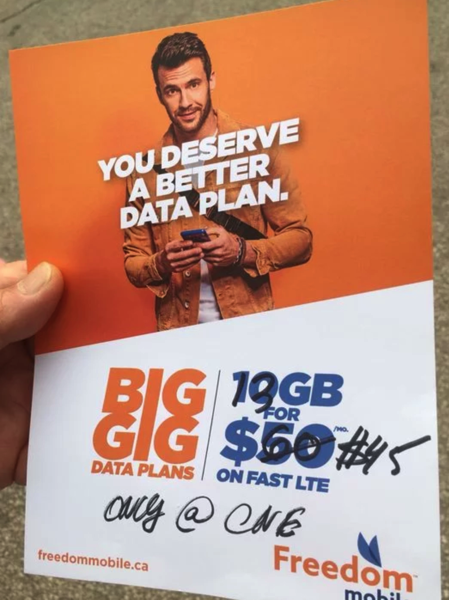 Again, if you were unable to jump on the Freedom Mobile friends and family deal, which offers 35% off plans $60 or higher, this promo is not bad, considering you will get 13GB of data for $45, which is much cheaper compared to equivalent plans from Rogers, Telus and Bell.

Shaw’s Freedom Mobile recently launched their back to school 2022 promo plans, available for those looking to purchase a phone or bring your own phone customers. Two plans are available: $35/10GB $40/20GB Other offers include the following: Add a line for $30/10GB $19/1GB prepaid plan $99/year for prepaid unlimited talk and text Normally, the 20GB...
Gary Ng
3 days ago

Rogers, Shaw and Quebecor announced on Friday they have signed a deal for the sale of Freedom Mobile to the latter, making their initial $2.85 billion agreement from mid-June now official. The deal is subject to regulatory approvals and the closing of the Rogers-Shaw merger. According to all three telcos, the deal "provides the...
Gary Ng
7 days ago