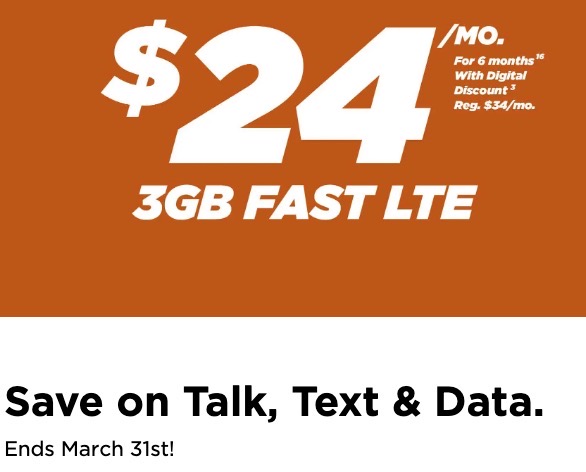 Shaw’s Freedom Mobile has launched a new promo for prepaid customers, offering a $24 per month plan with 3GB of LTE data, for six months only.

Freedom Mobile says the $24/3GB plan is after Digital Discount (setting up a credit card pre-authorization) and is only good for six months. The regular price of the plan is $34 per month.

This plan includes unlimited nationwide calling and global text messaging and is only available for new prepaid activations, it says. Freedom Mobile says a $10 one-time connection fee applies for new activations and the promo ends on March 31, 2021.

The company’s website has an existing prepaid monthly plan at $24 per month with 1.5GB of data, so this promo doubles what’s normally included, albeit only for half a year. This plan might be good for light users or for a kid’s first cellphone.

Last week, Rogers announced it had signed a deal to acquire Shaw for $26 billion, a deal noted by analysts is good for investors but bad for consumers.

Shaw’s Freedom Mobile recently launched their back to school 2022 promo plans, available for those looking to purchase a phone or bring your own phone customers. Two plans are available: $35/10GB $40/20GB Other offers include the following: Add a line for $30/10GB $19/1GB prepaid plan $99/year for prepaid unlimited talk and text Normally, the 20GB...
Gary Ng
8 hours ago