T-Mobile has put the brakes on their popular North America voice and data plan, which offered American customers unlimited LTE roaming in Canada and Mexico.

Starting November 12, the company says a 5GB cap will be implemented, which will impact the minority of Canadians using the plan here. So this means 5GB data combined LTE roaming between Canada and Mexico:

Starting November 12, 2017 customers on T-Mobile ONE, Simple Choice North America, or legacy rate plans with a qualifying feature will receive unlimited talk, text and data with a maximum of 5GB of 4G LTE. After 5GB of high-speed data is used in Mexico and Canada (or your high-speed data allotment is reached, whichever comes first), customers will stay connected with unlimited data at Simple Global speeds (up to 128kbps for most plans or 256kbps with T-Mobile ONE Plus). 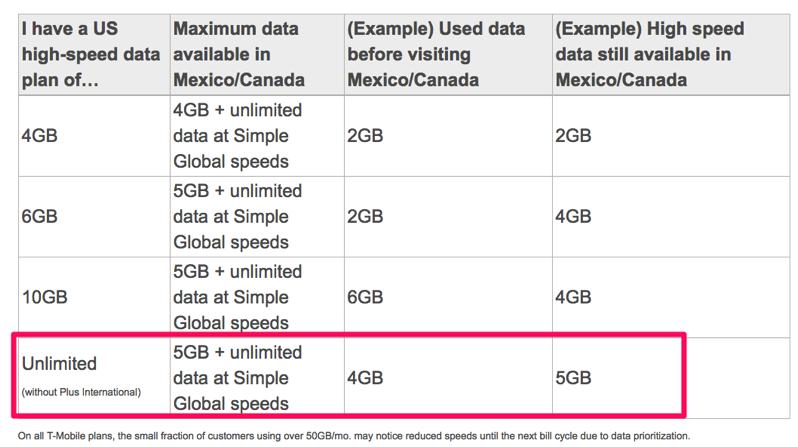 A spotlight on how Canadians were using T-Mobile cellular plans was highlighted earlier this year by Vice Money, which showed how for $50 USD, one could get a plan with unlimited data, text and calls in Canada, the U.S. and Mexico.

T-Mobile explains they’re making this change “In order to prevent usage beyond the intent of the product,” adding “Less than 1% of people with this benefit travel to Mexico and Canada use over 5GB a month.”

Many probably saw this coming, as customers roaming on LTE in Canada would mean T-Mobile paying its roaming partners here, and for a small number of users exploiting the plan, the free ride looks to have come to an end.

Rogers, Telus and Bell announced this week they will be waiving all long distance calls and texts made from Canada to Iran. The temporary waiving of charges depends on carrier, postpaid and prepaid accounts, with different end dates. “To help Canadians stay connected to loved ones, Rogers is temporarily waiving long-distance calls and SMS messages […]
Gary Ng
23 hours ago