For Canadians that travel extensively to the USA, you’re probably familiar with T-Mobile. Their pay as you go options are popular with unlocked iPhone owners (Roam Mobility also uses their network), and increasingly so as their 4G HSPA+ availability continues to expand across major U.S. cities (versus their existing 1700Mhz 3G HSPA+ network, which offered 2G speeds to iPhone owners; this network is being transitioned to faster 4G LTE).

Today, the company finally announced it was receiving the coveted iPhone on April 12th, six long years after Apple’s original smartphone launched in 2007. What makes this launch unique is the company will receive its own version of the iPhone 5 to accommodate the network’s AWS LTE spectrum bands, plus support HD Voice, something not yet supported by other U.S. carriers (Rogers, TELUS and Bell have supported HD Voice for a while now).

“This is an important day for people who love their iPhone but can’t stand the pain other carriers put them through to own one,” said John Legere, president and CEO of T-Mobile USA. “We feel their pain. I’ve felt the pain. So we’re rewriting the rules of wireless to provide a radically simple, affordable iPhone 5 experience — on an extremely powerful network.”

T-Mobile also introduced a new pricing plan without contracts for the iPhone, which is an industry first. Using a 16GB iPhone 5 for example, customers will buy devices outright. They will pay $99 up front, then $20 per month afterwards for 24 months, for a total of $579 in the end (unlocked iPhone 5 units cost $649 US; in Canada it’s $699).

Last December, Apple confirmed T-Mobile would carry its products this year and it has finally arrived. This AWS-band iPhone 5 will work on WIND Mobile and Mobilicity (and Videotron), but will be limited to slower 3G speeds.

According to the following hands-on photo via Engadget, the T-Mobile iPhone 5 shows model A1428 on the back, which is the GSM model for Canada and the USA: 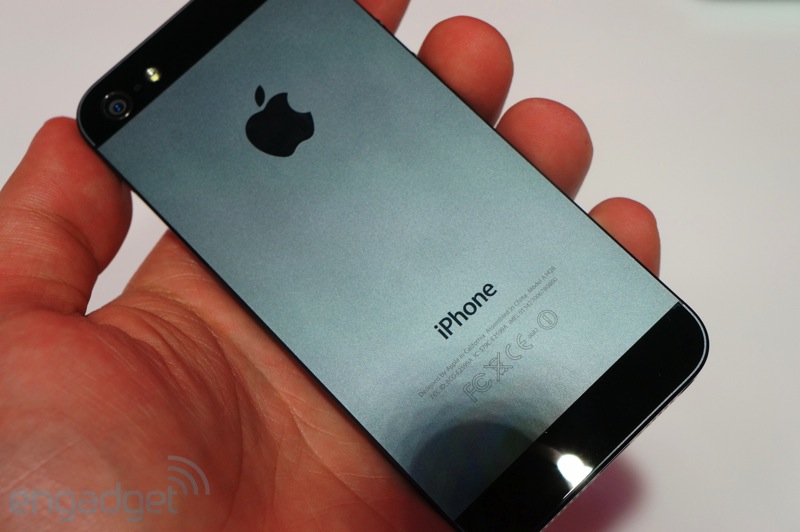 The bigger question–will these new wireless entrants ever get the chance to launch the iPhone on their networks (even if it was just the iPhone 4 or iPhone 4S)? The lack of iPhone has been the achilles heel of these new networks, something the ‘Big 3’ have benefited greatly from.

Apple does mandate strict requirements for networks when it comes to the iPhone, so if anything AWS-LTE support would be required first, plus a sizeable customer base. With WIND Mobile rumoured up for sale, the company’s future remains up in the air. If the iPhone ever makes its way to our newer wireless entrants, it could be a wireless industry game changer.

Update: Engadget follows up to report Apple is factory-enabling AWS on these T-Mobile iPhone 5 units (which is the same GSM model used in Canada), something we won’t be able to do:

For those paying attention, that’s the same model number as AT&T sells today, but Apple’s enabling support of the AWS bands from the factory on the new guy — and sadly, Apple affirmed to us that it’s not something that can be enabled via a simple software update for A1428 iPhone units already in circulation. To say that another way, existing iPhone 5 owners on AT&T cannot simply apply a software patch to have AWS support added. You’ll need to buy a new phone next month.

Also, Apple will soon be phasing out existing A1428 models, and sell these new tweaked AWS-enabled phones instead, which will work on AT&T’s LTE network. Let us know if you’re going to buy an unlocked T-Mobile iPhone 5 from the USA. It should work on LTE networks here in Canada, plus AWS-3G on WIND Mobile, Mobilicity and Videotron.