With the rising number of smartphone users, data demand is also increasing, which puts stress on overall network quality performance, which has deteriorated compared to last year, according to the J.D. Power 2016 Canadian Wireless Network Quality Study released today.

As J.D. Power points out, networks have been put to the test by the customers’ use of data-heavy apps and features on their smartphones, resulting in more network problems. While the overall score was 9PP100 in 2015, this changed to 10 PP100 this year. Data problems also increased to 15 PP100.

J.D. Power investigated telco network quality in the East, Ontario, and the West. In the East region, Bell, Telus, and Videotron deliver the best network performance (9 PP100), according to the market research firm, while in Ontario, the crown goes to Telus with the same 9 PP100.

In particular, usage incidences for most wireless phone features have increased from 2015, including those that use relatively large quantities of data such as video chatting (18% from 14% in 2015); share location (14% from 10%); and mobile payments (19% from 14%). Similarly, the incidence of customers who use apps on their smartphones has risen to 86% from 84% in 2015. For example, the usage of social networking apps during the previous seven day period has grown to 56% from 52%; Web browser use is up to 42% from 39%; and health and fitness app usage has increased to 18% from 15%. 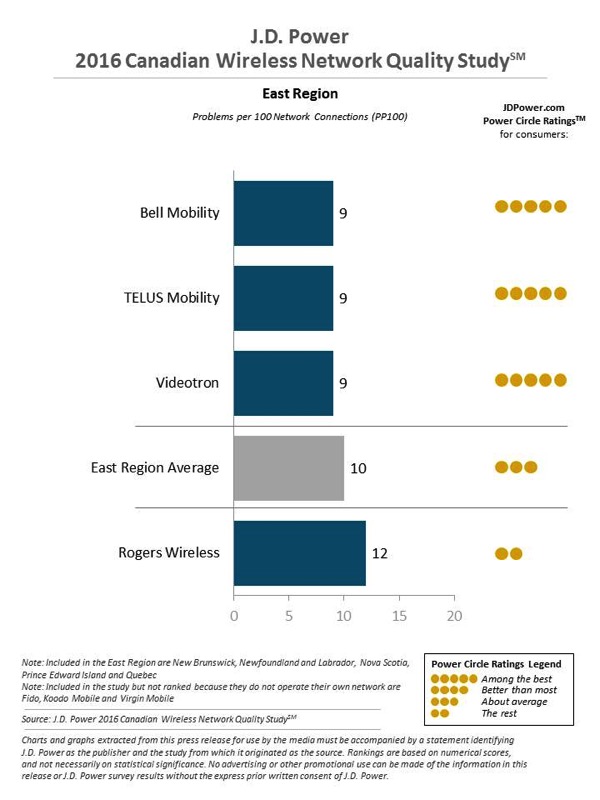