On the second day of the CRTC public hearing, Telus wireless plan pricing was in the focus of the regulator, one of the biggest issues noted by Canadians in their replies to the working draft of the Wireless Code. 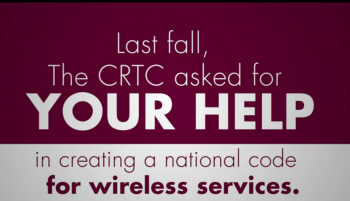 Telus was asked to answer the uncomfortable question of why it doesn’t lower monthly fees after the expiration of their contracts to customers who don’t upgrade their mobile phones.

As you may already know, smartphone subsidies are blended into the monthly rates you pay on your three-year plan. Although the CRTC has previously said it doesn’t want to actively regulate wireless pricing, the question was timely, as the carrier has recouped its costs while keeping the subscriber locked to its network for 36 months.

“I don’t get that because it has been amortized. Why are they paying past the 36th month? If you’ve said that you’ve recovered your costs in that 36 months to subsidize it – and I get that is sort of a way of helping folks get into this and you want to keep it. But assuming that somebody does not want to upgrade because the phone is great (and) meets their needs, why doesn’t the cost go down?” CRTC chairman Mr. Jean-Pierre Blais asked.

Turns out Telus offers a 10% discount for subscribers who decide not to upgrade, and even spends “marketing dollars” to advertise it. Yet CRTC chairman Jean-Pierre Blais questioned the incumbent’s policy of presenting consumers the option of keeping their devices and saving money.

“We find the vast majority of our customers upgrade at that point (upon the expiration of a three-year contract) and move into another contract term with another subsidy,” Dave Fuller, Telus’s chief marketing officer said. “In the event that you decided that you wanted to keep the device because it is fine … then you can move to a new rate plan at 10 per cent off.”

As the comments submitted on the CRTC Wireless Code draft show, monthly pricing is among the top complaints of Canadian wireless subscribers. Even the Competition Bureau has told the CRTC that three-year contracts hurt market competition, pointing to other countries such as the US where the norm is the two-year contract.

Incumbents, however, are suggesting Canadians are comfortable with three-year contracts. Furthermore, Bell’s records show Canadians replace their smartphones every two and a half years, which is the fourth-shortest handset replacement cycle in the world. How often do you replace your device, and is there any specific reason for not choosing an upgrade?