If you’re looking to pick up a 16GB iPhone 5c, Koodo has dropped the outright price to $500 (no contract), only available in stores.  Apple sells the same phone for $599, but it comes factory unlocked. 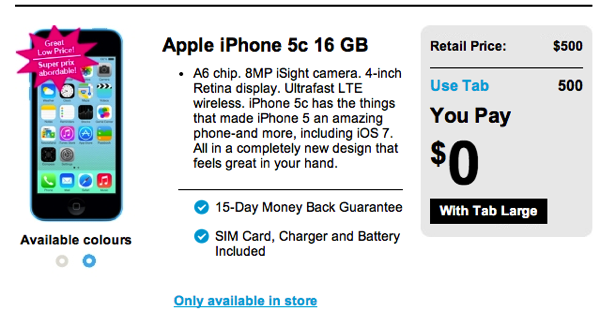 If you’re an existing Koodo/Telus user, it might be a decent deal since you won’t have to pay $35 to get it unlocked and can use it right away.

According to the CRTC Wireless Code, postpaid users buying a phone outright means you can get it unlocked immediately without waiting 90 days. In this case, you’re saving $64 versus buying from Apple (Koodo: $500+$35 = $535; Apple: $599).

If you’re not a Koodo user, find a friend who’s on a postpaid plan and get them to buy the iPhone 5c outright for and get it unlocked immediately. You’ll be saving $35 this way but there’s work involved.

Also, it’s being reported on RFD that certified pre-owned Koodo 8GB iPhone 4S models are available in some stores for $200 outright without activation. If you pay $35 to unlock this phone then it’s a cheap $235 iPhone 4S, albeit ‘old’ and a smaller capacity.

Let us know if you’re going to jump on these!