Koodo has been sending out an offer to customers via text message, with a “great deal”, offering a $5/5GB monthly data add-on. 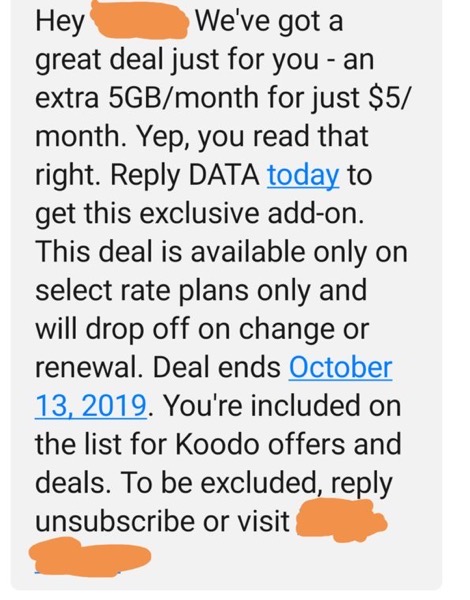 According to the text message, it reads (via RFD):

“Hey____ We’ve got a great deal just for you – an extra 5GB/month for just $5/month. Yep, you read that right. Reply DATA today to get this exclusive add-on. This deal is available only on select rate plans only and will drop off on change or renewal. Deal ends October 13, 2019.”

Users being targeted with this Koodo offer via text message appear to be in Ontario and on the $50/8GB migration plan from Public Mobile from last year.

Why the sweet deal for select customers? It’s a way for parent company Telus to increase the monthly spend of customers, particularly those coming from prepaid and now in a postpaid plan. When data overages are at $100 per gigabyte ($10/100MB), this offer of $1 per gigabyte seems pretty enticing.

Did you get this text message offer from Koodo?