Koodo Mobile appears to be offering some customers the company’s rare $60 plan with 10GB of data, but also eligible for Tab Medium ($360 device loan).

According to a screenshot of the offer sent via text message, it reads (via RFD): 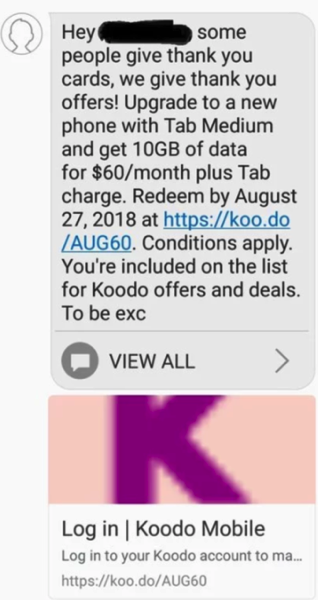 What makes this offer different from the $60/10GB holiday plan from 2017, is that this offer is Tab Medium eligible, whereas the previous plan was BYOD only. This means customers can upgrade to a new smartphone and also pay off their Tab Medium balance over two years.

On Koodo’s website, only the iPhone 6s is Tab Medium eligible. Right now, the iPhone 6s is available for $0 up front, but you’ll have to pay $15 per month for two years to pay off the $360 tab.

Koodo Mobile has been sending out some pretty decent offers lately. Just last week, it offered a $45 plan with 8GB data for Public Mobile customers, in an effort to get them to switch back to the Telus flanker brand.

Did you get this text message offer from Koodo Mobile?