In case you missed it, Koodo Mobile’s animated character wrestler known as El Tabador, will soon be coming to a TV sitcom near you. 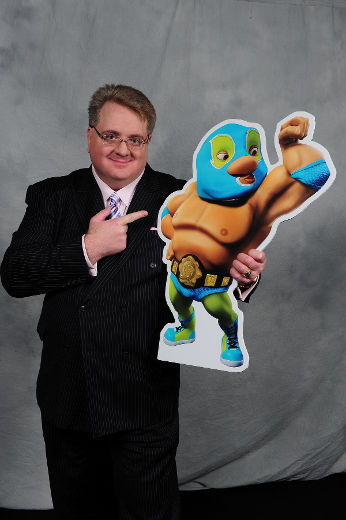 Former WWE Canada president Carl Demarco and company Camillion will take the El Tabador to a half-hour primetime family TV sitcom which will feature the Koodo Mobile character, as they have inked a global rights deal for exclusive use of the character

The show will target mainstream family audiences and wrestling fans alike, which Koodo believes will be a unique branding opportunity:

“This is an excellent opportunity for Koodo to break the traditional barriers of marketing, sponsorship and advertising,” says Kevin Banderk, Chief Koodo Officer. “We’re excited for the chance to further entrench El Tabador into popular culture.”

In a lengthy interview over at Niagara Falls Review, Demarco reveals the deal took two years to get it done and was in part thanks to his wife:

“It’s funny, in my home I have this fireplace and my wife found the El Tabador characters … the figurines. And I have that on my fireplace, and she kept saying to me ‘This is an incredible deal.’ My wife has a pretty good eye for stuff like that. She loved it. So she says ‘Why aren’t you doing something with this?’ And you know what? The light bulb went off, and she was right. And it took me two years to get the deal done. And I got it done, and I’m very proud of the deal. The guys at Koodo got it. They’re smart guys, I love those guys, and they got it. And I’m going to take this character worldwide and we’re going to turn it into a global worldwide intellectual property.”

The sitcom he promised will have cutting-edge animation and “is going to be a real comedy sitcom style of show,” and when it comes to promotion for the new venture, Demarco says he will “blow it right out of the water and take it to a whole new level.”

Would you be interested in watching a TV sitcom featuring El Tabador?