Telus flanker brand Koodo has launched some new rate plans for bring your own device customers, along with Tab Small and Tab Medium contracts.

The new “limited time offer” is showing the following new plans, which could be enticing heading into Black Friday: 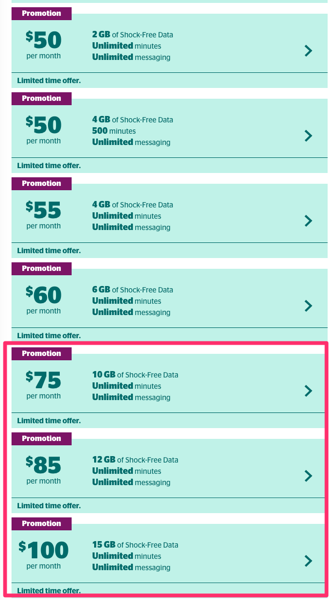 All plans include unlimited Canada-wide minutes and unlimited text messaging, while data overages are billed at $10/100MB, or $100/1GB.

At $75/10GB, this is not as good as the holiday $60/10GB plan from late 2017, but these plans with more data may appeal to heavy BYOD and Tab Small/Medium customers.

As of writing, flanker brand rivals Fido and Virgin Mobile have not matched the Koodo promo (they’re only offering 3GB data bonuses still), which looks to possibly start a mini price war leading into Black Friday.

Update: Koodo has updated the plan to now include 5GB of extra data per month over 24 months, or 120GB of LTE data. The marketing looks to counter Freedom Mobile’s own 100GB LTE data bonus.

Get the $75 No Tab, Tab Small or Tab Medium plan and receive a 5 GB bonus data every month – over 24 months that represents 120 GB of bonus data.