Telus flanker brand Koodo appears to be calling their loyal customers to offer them some promotional plans unavailable on their website.

According to RFD, Koodo is offering up $75/20GB and $70/15GB BYOD plans, which are eligible for Tab contracts as well.

“I received a call last night from Koodo. Looks like it was a marketing effort. Last month I had called negotiated for the $60/10gb, now they call me and offer $75/20gb. So the plan and pricing are available..been with koodo for 7 years..” writes user ‘soblecram’.

Below is a screenshot of the plan, proving it is indeed real: 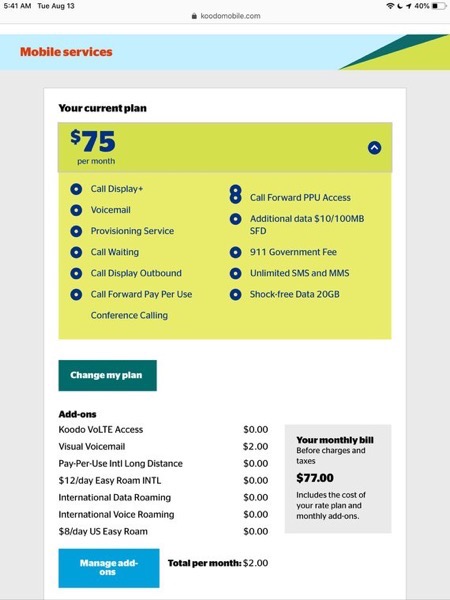 The Koodo team making these calls does not appear to be from the loyalty or retentions departments, because ‘soblecram’ later stated he/she had no intention of leaving the company at all, but received the call out of the blue.

Multiple other forum members were able to confirm receiving similar calls from Koodo with the same offer, plus an additional $70/15GB plan. These plans all come with the usual unlimited nationwide minutes and unlimited global text, plus usual extras.

Currently, Koodo’s website only lists a 10GB plan for $75, so these promo plans are cheaper than what’s available. These offers of a higher-priced monthly plan usually benefit parent company Telus, as it enables their average monthly revenue per user to increase, a metric closely followed by investors and the wireless industry.

Did you receive a call from Koodo recently with any of these promo plans listed above?

After Koodo launched a $45/50GB promo plan for Black Friday today, Rogers-owned Fido has now matched this offer. That’s according to reliable mobile insider ‘Thatdealguy’ on RFD, who noted the matching offer from Fido also is eligible for additional gift cards and rewards points bonuses at retailers such as Walmart, Best Buy, The Mobile Shop […]
IIC Deals
20 hours ago