Telus has finally launched VoLTE and Wi-Fi Calling for its Koodo customers with an iPhone, as earlier this afternoon a carrier update was pushed to bring support for Apple users.

The screenshot below shows the addition of VoLTE, which lets you use voice and data over the LTE network (instead of voice calls dropping to 3G). 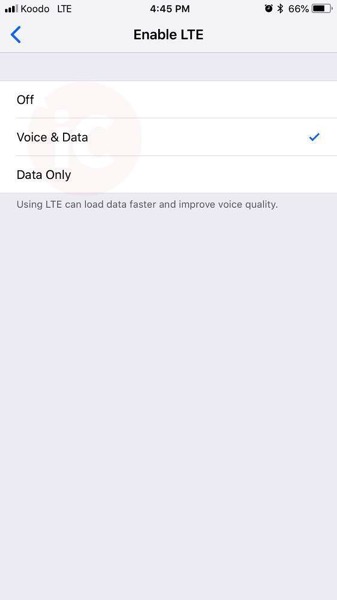 Koodo launched VoLTE and Wi-Fi Calling exactly one month ago, but support was limited to the LG V30 Android phone. Today’s announcement is as follows—note the addition of “iPhone 6 or newer”:

So, here’s something cool: Wi-Fi Calling and VoLTE is available for Koodo customers with the Android LG V30 or an iPhone 6 or newer! We’re adding additional devices soon!

How to get VoLTE and Wi-Fi Calling if you’re a Koodo iPhone customer? You need to install the carrier update by going to Settings > General > About (updated) and the update should pop up. Install it and you should be able to access more LTE settings.

Let us know if you’ve got VoLTE and Wi-Fi Calling working on your iPhone 6 or newer on Koodo.

Editor’s note: I would have published this earlier, but I was at Costco.