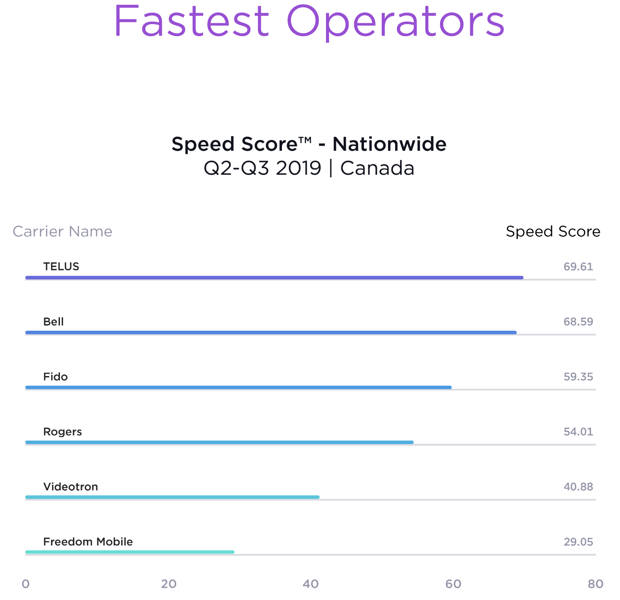 As for the fastest mobile operator in Canada for Q2-Q3 in 2019, Telus took the crown, just edging out Bell:

Rogers was in fourth, while its subsidiary Fido placed in third. Videotron was in the fourth spot, followed by Freedom Mobile.

The average mobile download speed in Canada for the period was 62.62 Mbps, while the mean upload speed was 13.85 Mbps. For the fastest mobile operators in major Canadian cities, both Telus and Bell dominated the results.

Telus previously won Ookla’s Fastest Mobile Network in Canada and Best Mobile Coverage in Canada awards in the previous Q1 and Q2 speedtest report. A Telus spokesperson told iPhone in Canada these awards are “reinforcing the strength of TELUS’ network across the country.”

“Canada’s already fast mobile speeds are continuing to improve. TELUS is the fastest provider at the national level and in six of Canada’s most populous cities. 4G is solidly available in most areas. We’ll be curious to watch these speeds improve as Canadian operators slowly roll out 5G,” concludes the Speedtest Intelligence report.

Telus prepaid brand Public Mobile has announced its holiday freebies are back for 2022, offering free data, long distance and more. “During this season of giving, we’re bringing back our Holiday Rewards and we’ve got some amazing things to give!”, said Public Mobile on Thursday. Public Mobile is offering up the following freebies for 2022 […]
Gary Ng
2 days ago

Telus-owned prepaid brand, Public Mobile, has extended its Black Friday 2022 deal that offered a $35/20GB plan for Cyber Monday. When new customers activate online and use promo code 20OFFMONTHLY, they can get the company’s $55 plan with 20GB with a $20/month credit for 15 months, taking the plan down to $35/20GB with 4G speeds, […]
IIC Deals
4 days ago