TELUS has a service called Pik TV, a media box that “connects you to the world of Android TV.” Customers will be able to access live TV and on demand channels, while also access Netflix and YouTube, from your home or away on mobile via the Pik TV iOS and Android app. 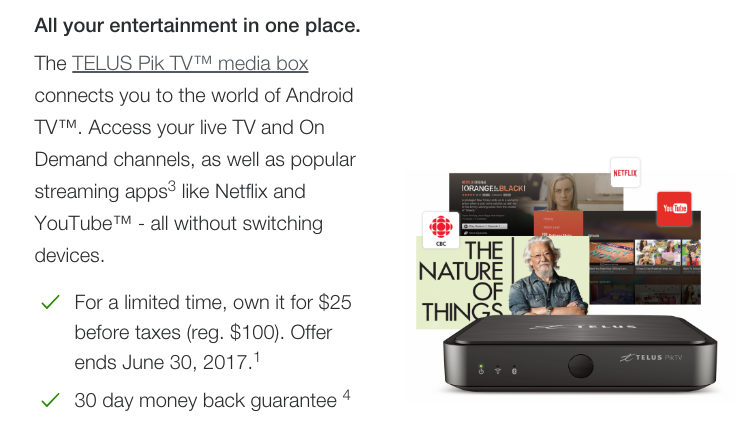 The goal with this service is to combine live TV, streaming apps and Telus Internet starting at $75 per month, without contracts.

There are requirements for Pik TV however:

Users will be able to add or remove channels via My Account, but only once every 30 days. Pik TV does not require any contracts and also doesn’t use your Internet data bucket and is limited to one Pik subscription per household.

Any TELUS Pik TV subscribers out there?

After Koodo launched a $45/50GB promo plan for Black Friday today, Rogers-owned Fido has now matched this offer. That’s according to reliable mobile insider ‘Thatdealguy’ on RFD, who noted the matching offer from Fido also is eligible for additional gift cards and rewards points bonuses at retailers such as Walmart, Best Buy, The Mobile Shop […]
IIC Deals
17 hours ago