For those who use (or are considering) Telus, they currently have a promotion running with the folks over at SCENE to award 5,000 SCENE bonus points (the equivalent of 5 free movie passes worth approximately $60) to customers who activate or renew before September 30, 2012. In case you aren’t familiar with SCENE, it’s a free movie-oriented rewards program that allows you to earn points when buying movie tickets, concession items and other merchandise that can then be redeemed for free movie tickets, etc. 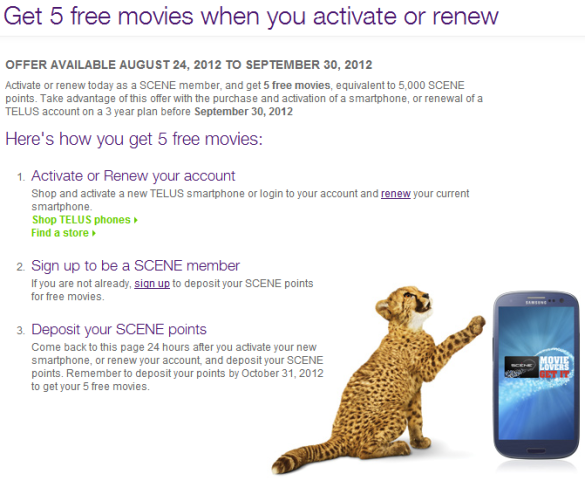 According to Telus, customers who activate or renew on a 3 year plan before September 30, 2012 will be eligible to receive 5,000 SCENE points that can be deposited to their SCENE account after the renewal is processed. To be eligible for bonus points, members must purchase and activate and/or renew a new TELUS smartphone on a 3 year term by September 30, 2012 and enter details from TELUS activation and SCENE membership at www.telusmobility.com/scene before October 31, 2012.

SCENE members can also use the Cineplex Mobile iPhone app to access their SCENE account balance and other information. While I don’t use Telus, I’ve been a SCENE member for a few years now and have managed to earn a few free movies along the way.

With the iPhone 5 launching in two days, this sounds like a great way for Telus customers and SCENE members to get a little bonus along the way. Just remember to put your new iPhone in Do Not Disturb mode before the movie starts. 🙂

What do you think of this offer? Are you a SCENE member planning to activate or renew with Telus this Friday? Let us know in the comments.