Telus “Win Back” Offer: $76/10GB Plan with $0 Premium iPhone or Android on Contract

Last week we told you about the Rogers “win back” promo, where the company would call its former customers and offer them promotional plans to bring them back to the network. Rogers customers were offered an $80 plan with 10GB data, $500 port credits and also a $0 iPhone 8 on contract.

Now, it appears Telus has a “win back” offer of their own, according to forum members on RFD. Telus is offering a $76 plan with 10GB of shareable data, while offering a $0 Samsung Galaxy Note 8 on contract.

According to details posted by RFD user ‘vietkid69’, he showed his Telus summary of his “win back” offer, which shows the full $1,300 retail price of his Note 8 being $0 up front. He noted to other users “any phone” is available with this offer, not just an Android device. 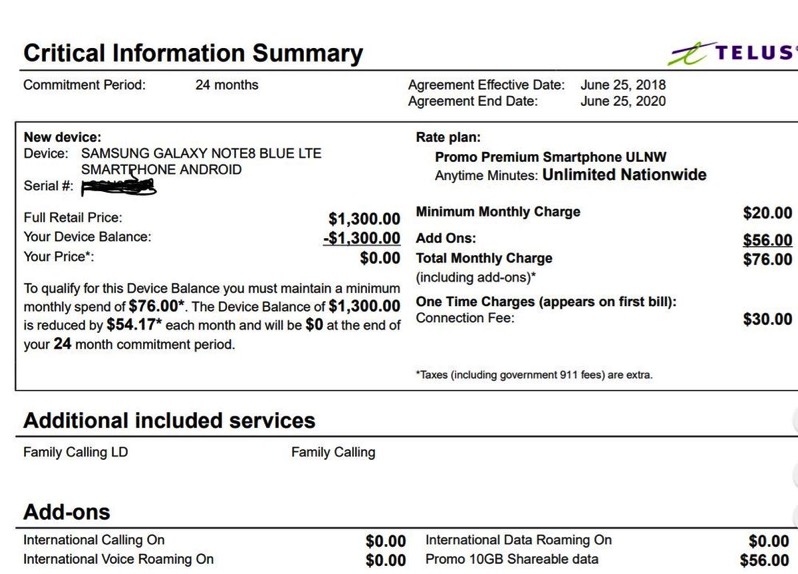 Back in December 2017, the holiday $60/10GB promo plan frenzy resulted in customers switching to other wireless carriers to jump on the plan. Now it appears the ‘Big 3’ will offer some sweet deals to get customers to come back.

One of Canada’s largest telecoms has confirmed it has acquired independent internet service providers (ISPs) Altima Telecom and London, Ontario-based Start.ca. Both companies are resellers of internet and cable services. Peter Novak, Vice-President of Insight & Engagement at TekSavvy, said on Friday morning, “Got it confirmed: http://Start.ca, another indie ISP, has been quietly acquired by […]
Gary Ng
19 hours ago