The Most Expensive Bandwidth in the World: Yukon’s Northwestel

We’ve covered the issue of Internet usage in Canada, along with the whole usage-based billing (UBB) debate in the following articles:

Compared to the rest of the world, Canadians are lagging behind when it comes to Internet prices. But whereabouts in Canada are people really paying the most? The Yukon.

Take a look at the following inclusion of Northwestel versus the world (here’s the original graph) added by Yukon journalist, Andrew Robulack. The pillaging of Yukon residents by Northwestel will bring you nausea beyond belief.

Below is the cost per gigabyte of bandwidth transferred: 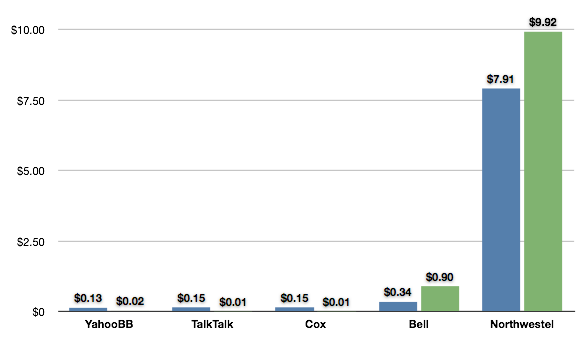 Andrew goes on to write:

But, even so, itâ€™s worth pointing out that at this level of costÂ Yukoners receive less service than anywhere else in the world for a far greater cost. And not just by a bit, but by a significant margin.

By how much is Northwestel marking up data to Yukon residents?

3Â¢ per GB [the ‘true cost’ to Internet providers]? Thatâ€™s a chilling number, when you consider that Northwestel resells it to internet customers for $10. In a nutshell, that means that Northwestel marks up the cost of the data that it doesnâ€™t even provide, but merely transmits, at a rate of 33,233%.

Industry, Science and Technology Minister François-Philippe Champagne wants concrete commitments on cellular service affordability from both Rogers and Quebecor before he approves the transfer of Shaw-owned Freedom Mobile's licences to Vidéotron, which will allow Rogers' proposed $26 billion takeover of Shaw to proceed — reports The Globe and Mail. According to the publication's sources, Minister...
Nehal Malik
17 hours ago