According to report by Moody’s Investment Service (via the The Canadian Press), U.S. carrier Verizon is estimated to require over $3 billion dollars in capital costs and three years to establish its network and mobile phone service infrastructure, which would include rural markets:

“Although competitive threats tend to cause uncertainty and can lead to performance pressure, we see limited downside for Bell Canada, Rogers Communications Inc. and Telus Corp. from a foreign company entering the market,” analyst Bill Wolfe said in the report, released Thursday.

The Moody’s report believes the battle in Canada would be focused on the user experience, instead of a price war, since Verizon would be required to build a quality network, seen as costly and time consuming. The time required for Verizon to make an impact would give incumbents time to improve their networks and service in the mean time.

An earlier report estimated the cost to replace WIND Mobile’s Huawei infrastructure with its own equipment at up to $100 million dollars.

An impromptu unscientific poll setup previously today on iPhoneinCanada asked readers if they would switch over to Verizon and whether any particular company should be favoured in the upcoming wireless auction. The results, as of writing, are below:

Would you switch to Verizon? 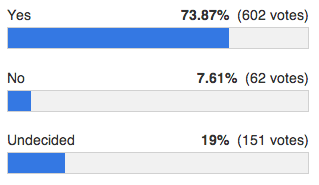 Should Verizon or Canadian companies be favoured in the upcoming wireless auction? 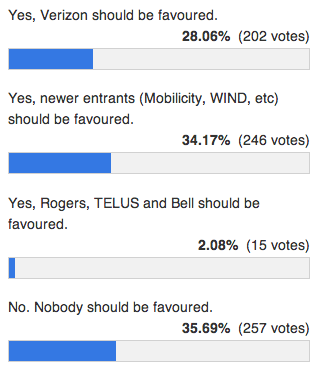 Despite Rogers, Telus and Bell continuing their negative ad campaign against Verizon and Ottawa’s current wireless spectrum policies, the Federal government does not appear to be phased and will continue with its wireless spectrum auction as planned, set for January 2014.