In the light of Verizon’s possible entrance into the Canadian wireless market, analysts have reassessed their views on the incumbents and the future isn’t looking good at all — at least for Rogers and Telus. 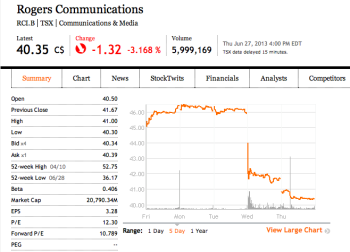 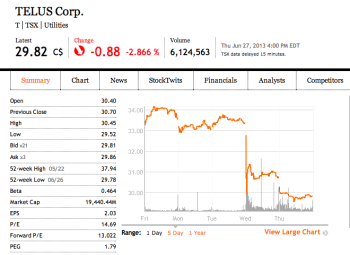 The Globe and Mail dropped the bombshell yesterday by reporting that Verizon has opened up talks with Mobilicity and has already bid $700 million for Wind Mobile. The shockwave was immediately felt on the Canadian stock market: share prices for Rogers and Telus began to tumble and are down for the second day, and face further downgrades.

The fact is, Verizon entering Canada would change the Canadian mobile landscape due to its significant financial resources. Verizon has double the market value of Bell, Rogers and Telus combined.

As for Rogers and Telus, Verizon’s entrance would be devastating, for the following reason: both companies depend on wireless profits, as the analysts cited by Bloomberg reveal. Looking at their recent quarterly reports, we find that earnings before interest, taxes, depreciation and amortization from the wireless business account for more than 60% of the total profit. 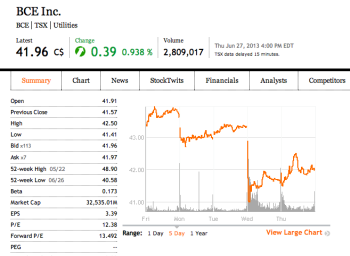 For Bell this looks slightly different: mobile phone business accounts for only 30% of total profits. This is the result of Bell’s $8 billion investment in acquisition over the past four years.

“The entry of Verizon into the Canadian wireless market would be the best-case scenario for the Industry Minister and the worst case scenario for the incumbent players,” said Tim Casey, an analyst at BMO Capital Markets in Toronto. Verizon has “deep pockets, and considerable scale and expertise in the business.”

Verizon is awaiting the federal government’s spectrum transfer rules, which are due out any moment. It is also looking forward to finally seeing the rules for the forthcoming wireless spectrum auction.

The above are only a few of the possible roadblocks Verizon faces before entering Canada. And in case of a green light, the impact on the incumbents’ balance sheets would likely appear starting next year.