Videotron’s Unlimited Music service allowed customers to stream music from a variety of services, including Apple Music, without impacting the allotment of their monthly data plan.

The CRTC ruled in April for Videotron to end its Unlimited Music service, as part of ruling on differential pricing, the practice of charging various prices for different data streams.

In letters being sent out to customers Videotron explains their Unlimited Music service will shut down on August 4, 2017. In a move to allow customers to keep listening to music, Videotron is offering a free data add-on, an amount determined by a customer’s highest music data consumption in the past 12 months.

iPhone in Canada reader Kevin explains he was granted a 4GB add-on to his existing $61.55/6GB BYOD plan, giving him 10GB for $61.55 per month. While the offer is free data, Kevin notes Videotron’s existing “Double your data” promo offers similar plans, with a comparable plan being $63.95 for 10GB data, similar in nature to his promo offering.

Check out his letter below en français: 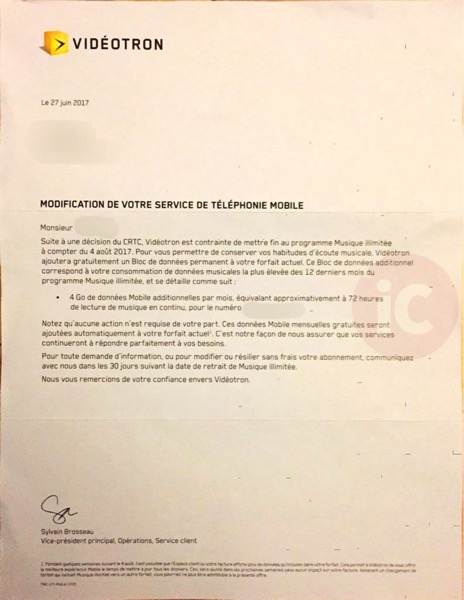 According to readers over at MobileSyrup, they’re seeing free add-ons between 2GB and 8GB per month. So it really depends on a customer’s Unlimited Music usage to see how much data is being given per month.

Videotron launched its Unlimited Music service back in the fall of 2015. How much free data are you seeing from Videotron?