For those interested or on WIND Mobile, the company has launched a $39/month Holiday plan which offers the following: 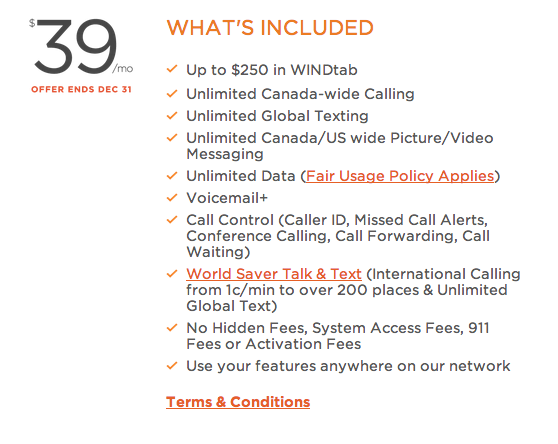 The fine print says this plan is available from December 2 to December 31. Also, it cannot be combined with their Bring Your Own Phone service credits (but you can still bring your own unlocked phone of course).

A comparable $39 plan from a major carrier such as Fido only includes 400 Canada-wide daytime minutes, 5pm evenings/weekends and 400MB of data.

For those unlocked iPhone 5 (late AWS models), iPhone 5c and iPhone 5s users, your devices will work on WIND Mobile’s AWS network—but of course you won’t get LTE download speeds. However, if normally reside in a major urban area with decent WIND coverage and care about price, this all-in-one plan may be just for you.