WIND Mobile has launched their promotional holiday plans for 2015, offering the following ‘Unlimited’ plans priced at:

– Unlimited Data (with 3GB full speed access)
– Unlimited Canada/US-Wide Talk
– Unlimited Global Text
– Voicemail+
– World Saver
– World Traveler
– Unlimited US Long Distance
– Call Control Features
– Up to $100 off the purchase of a new phone with WINDtab
– PLUS get up to $15 extra to play with every month. 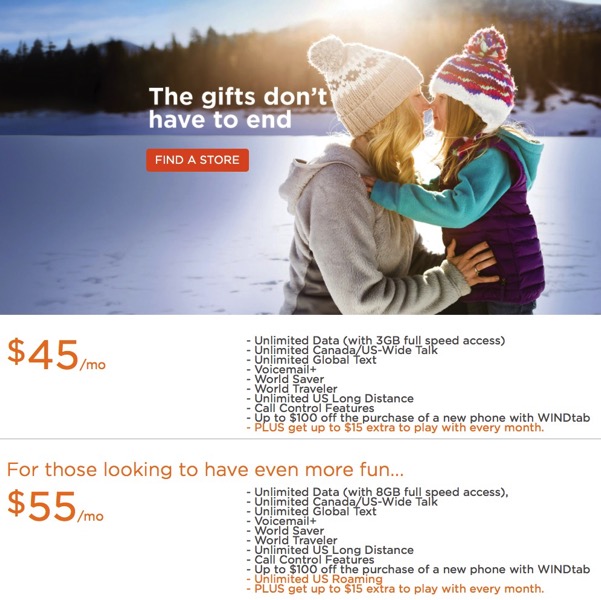 If you bring your own device (BYOD), customers get $15 of service credits each month, which can be applied to roaming or global calling minutes. These holiday plan are available starting today until December 24, 2015.

It seems like WIND Mobile’s prices are slowly creeping up, as back in the summer a $39 promo plan offered more value. The company also has plans to launch an LTE network in 2016 and acquire newer iPhones for its customers. In the meantime, it’s best to check coverage in your area before jumping onto WIND, as you’ll find many complaining online about weak signals and connections.

Here are the latest Canadian cellphone plan and device deals, plus other promos from wireless carriers such as Rogers, Telus and Bell, from our partner PlanHub. As always, the promos may change at the last minute, but here they are as of Wednesday, November 23, 2022, which include numerous Black Friday and Cyber Monday deals. Check them […]
IIC Deals
11 hours ago

Canada's Competition Bureau on Tuesday refuted Shaw's claims of not having "a viable path forward" if its proposed $26 billion takeover by Rogers fails — reports BNN Bloomberg. While cross-examining Shaw CFO Trevor English in a hearing before the Competition Tribunal, the Bureau argued that the telco is in a pretty comfortable spot financially. The competition...
Nehal Malik
15 hours ago