As expected, Industry Minister James Moore announced today the results of the 700MHz auction. The announcement marks the end of a five-month-long bidding process that will shape the Canadian wireless landscape for years (at least 5, but up to 20 years).

Spectrum is the “lifeblood” of the industry, and the 700MHz spectrum is valuable due to its ability to travel longer distances and penetrate buildings. Also, the auction will set the base of future wireless network upgrades, faster network speeds, so carriers can meet demand for the faster LTE networks and data hunger.

You may recall the debate around Ottawa’s wireless policy and the spectrum auction. The Big Three pointed to what they called “flaws” in the government’s wireless policy, which allegedly gave an unfair advantage to new entrants.

Here is what they fought for: There were 14 license areas in the country, with each one divided into seven blocks of 700MHz spectrum. The catch is that, of those, four are viewed as prime blocks. The government’s policy forbade incumbents from grabbing prime blocks, while wireless startups were allowed to buy two.

You may recall that, of the 15 interested parties, only 10 were left when the auction kicked off mid-last month, which weakened Ottawa’s plans to foster competition.

Here are the results by licence area. 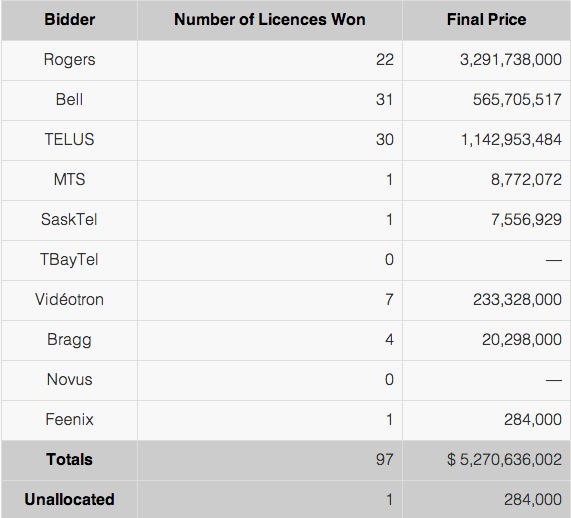 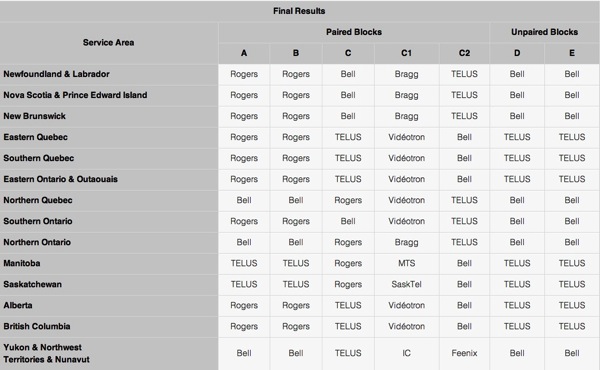 The 700MHz auction generated $5.27 billion, the highest return ever. In this auction, there were 108 rounds of bidding that took place over 22 business days.

The government has finally managed to enable more choice for Canadians, as a fourth player has emerged in every region of the country, the Industry Minister announced. When asked a question during his Q&A about Videotron, Moore said “they have the capacity” to become the fourth national wireless player. Residents in BC, Alberta and Southern Alberta should be hopeful.

Incumbents have secured prime spectrum in every region, as expected.

The companies obtaining spectrum will be able to start using them by mid-April.