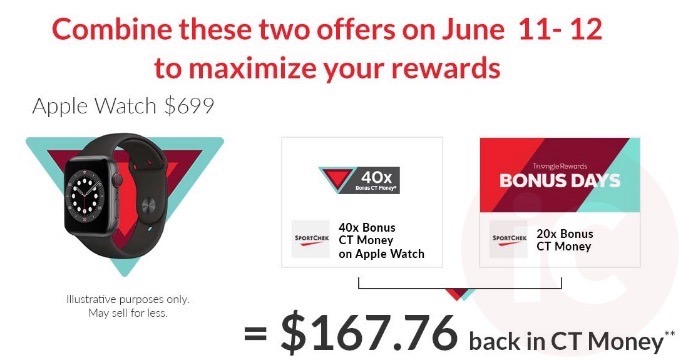 Looking for an Apple Watch Series 6? Time to head over to Sport Chek, as there’s a bonus CT Money event happening right now, that can be stacked with a bonus on Apple Watch.

According to the email we received, a 40x bonus CT Money offer on Apple Watch can be combined with a Triangle Rewards bonus days event at 20x CT Money, resulting in a 60x bonus.

If you own a Triangle Rewards Mastercard, it’s a 30x bonus, so when combined with the 40x bonus, that’s a 70x CT Money reward on Apple Watch Series 6, saving you well over 24% off.

The Triangle Rewards Bonus Days is available from Friday, June 11 to Saturday, June 12 only, so if you’re searching for a Father’s Day present, this might be the one to jump on.

Here are the latest Canadian cellphone plan and device deals, plus other promos from wireless carriers such as Rogers, Telus and Bell, from our partner PlanHub. As always, the promos may change at the last minute, but here they are as of Wednesday, September 21, 2022. Check them out below… Bell Noticeable price changes: Pre-order iPhone […]
IIC Deals
5 days ago

If you’re looking for a tablet for the kiddos, Amazon has slashed the price on its Fire HD 8 Kids tablet, down to $124.99, saving you $55 or 31% off, matching an all-time low on the site. The Fire HD 8 Kids tablet runs a version of Android and has an 8-inch HD display, plus […]
IIC Deals
7 days ago