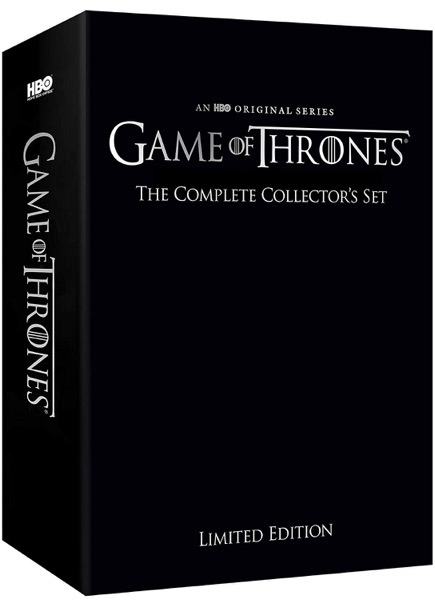 For you or die-hard fans of Game of Thrones, Amazon.ca has launched pre-orders of the Collector’s Edition Blu-Ray complete boxset, featuring seasons 1-8, available at a pre-order price of $329.99, saving you $55 off (14%). The price works out to $41.25 per season, plus you get a simple limited edition black box, which matches the theme of this final season.

No release date is set yet, but of course this will be available shortly after season eight completes its run on HBO.

According to the product description, you’ll also get all 73 episodes and 15 hours of bonus content and special never-before-seen footage:

Based on the best-selling novel series by George R.R. Martin, HBO’s drama series Game of Thrones holds the record as the most awarded series in television history. This limited-edition, custom-designed complete collector’s set includes all 73 episodes of this epic eight season series. Also included is 15 hours of bonus content and never-before-seen footage.

For those looking for Season 8 on its own, you can get the Blu-ray and digital copy for pre-order at $65.91 on Amazon.ca.

Click here to pre-order the Game of Thrones: The Complete Seasons 1-8 (Collector’s Edition/Blu-ray/Bilingual), while the pre-order price is still available.