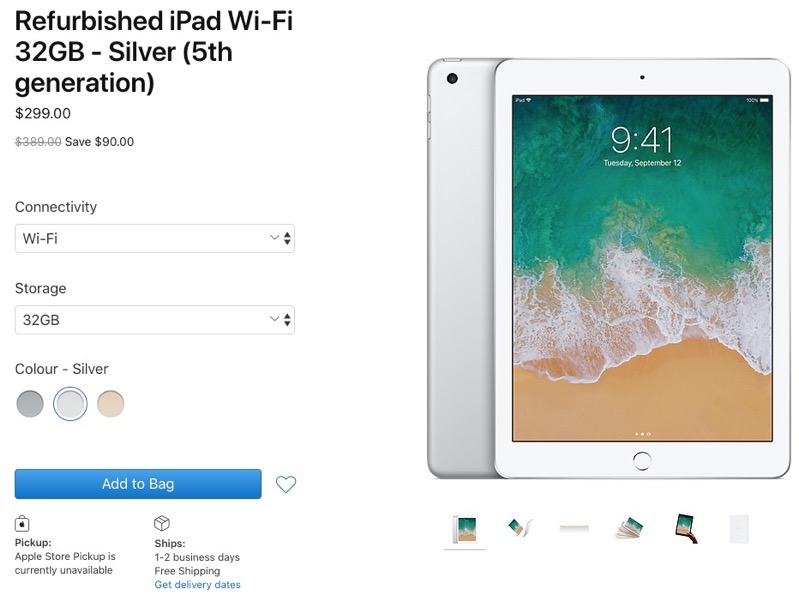 If you need a ‘cheap’ iPad for the kids or streaming content, Apple’s older fifth-generation iPad with 9.7-inch Retina display has been restocked online within the refurbished store.

As of writing, the 32GB Wi-Fi iPad is available for $299, saving you $90 according to Apple. This iPad was originally released in March 2017 and is powered by the company’s A9 CPU. There are also 128GB Wi-Fi models available for $399.

Refurbished iPads come with a new battery and outer shell, along with standard one year warranty from Apple.

During the COVID-19 pandemic, demand for iPads have increased as most people remain home and consume online content.

For those waiting for the newer iPad 6 refurb, it usually sells for $359 and might be worth waiting for if you want a processor bump to the A10 Fusion. But at $299 for an iPad with a new battery, shell and warranty for casual use, you can’t beat the price.

Click here to jump on this iPad on Apple.ca while it’s still available. Refurbished stock usually sells out quickly.

Costco Canada notified members today of their Black Friday savings available both online and in-store, offering a variety of deals on tech and more. Check out some of the savings available from Costco.ca below… Apple  Save on Select Macbook Air M1 – $150 OFF AirPods Pro (2nd gen) – $297 AirPods 2 – $149 Apple Watch […]
IIC Deals
16 hours ago