Apple and U2 announced a free giveaway of the band’s new album, Songs of Innocence at the recent iPhone 6 media event. The catch though? The album was pushed automatically to iTunes Accounts purchases and those with iCloud turned on saw it appear without them knowing, which caused quite the public backlash.

Apple has now shared a support document on how to remove the U2 album from your purchases with a new one-click tool:

To remove this album:

4. You’ll see a confirmation message that the album has been removed from your account.

If you downloaded the songs to iTunes on your Mac or PC or to the Music app on your iPhone, iPad, or iPod touch, you’ll need to delete them manually.

Once you visit this page, the following message appears: 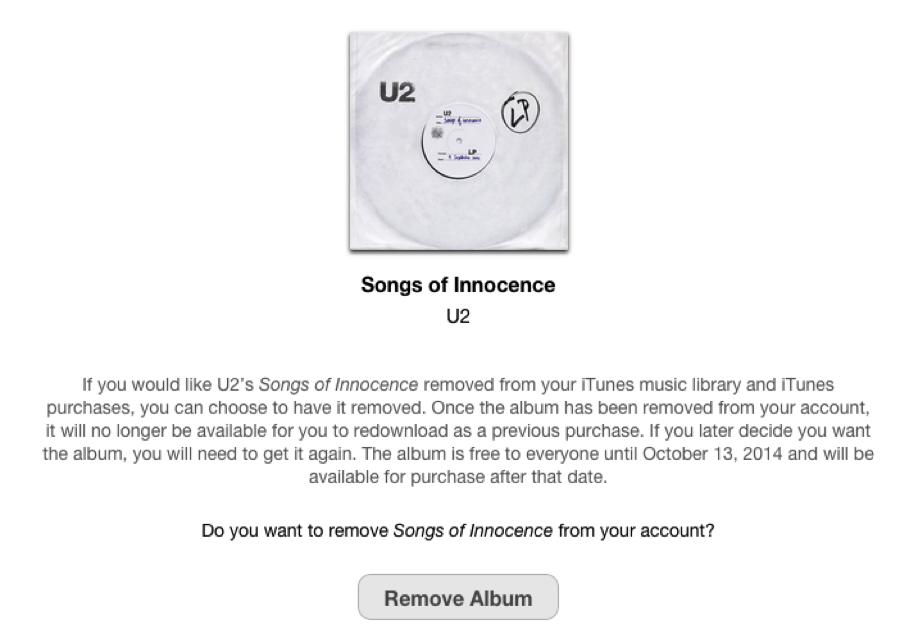 It basically says the album will be removed from your purchases library. If you want to download it again AFTER October 13, 2014, you’ll have to pay for it, since the free period will be over. Just click the ‘Remove Album’ button and U2 will be gone!

U2’s manager Guy Oseary told Mashable, if you don’t like this freebie, just delete it:

“It’s a gift from Apple,” Oseary said. “If someone doesn’t like the gift, they should delete it. … There are people who are going to be thrilled to get a gift. There are people who are not going to care to have this gift. We knew all of that going in. No surprises here. If someone doesn’t like it, then great, that’s OK, delete it. … We just want to share it with as many people as possible. If you don’t want it and you don’t need it, delete it.”

Update: Apple explains why it created the website to Bloomberg:

“Some of our customers asked for the ability to delete ‘Songs of Innocence’ from their library, so we set up this website” to “let them easily do so,” Tom Neumayr, an Apple spokesman, said today in a telephone interview. “Any customer that needs additional help should contact AppleCare.”