Apple Releases iOS 6.1.1 for Download for the iPhone 4S [Update]

Apple has released iOS 6.1.1 and currently is showing up as an OTA update on the iPhone 4S with the following description to address 3G issues:

This update fixes an issue that could impact cellular performance and reliability for iPhone 4S. 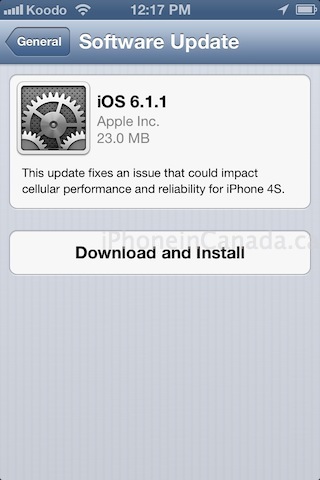 Earlier today it was reported Apple was set to release iOS 6.1.1 to address 3G performance issues. Apple released iOS 6.1 for download on January 28th and just five days ago released iOS 6.1.1 beta for developers, with map updates for Japan. You can download the update directly here.

Update: @planetbeing just noted evasi0n will work on iOS 6.1.1 and the iPhone 4S:

Apple released 6.1.1 for the 4S only today. The JB still works fine. We will release an updated evasi0n that recognizes it as supported.