After a record holiday quarter in terms of iPhone sales – 51 million – Apple’s US market share has surpassed that of Android, Consumer Intelligence Research Partners (CIRP) has found.

As you can see from the image below, iOS has a 48% share of the market in the country compared to Android, the world’s most popular smartphone OS, which accounted for 46%. CIRP’s findings are based on its survey of US mobile subscribers who activated a new or used mobile phone during the October–December 2013 period. 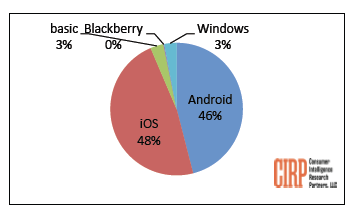 As we pointed out, based on reports issued by IDC and Strategy Analytics, the US smartphone market is a two-horse race between Apple and Samsung. The CIRP study underscores just that, as according to their findings, Samsung handsets accounted for 31% of smartphone sales during the past quarter. 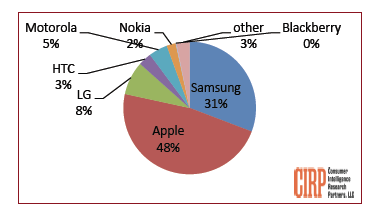 “Apple’s market share rebounded nicely from the previous quarter, when it had only one-third of total US sales,” said Josh Lowitz, Partner and Co-Founder of CIRP. “Conversely, Samsung’s share decreased to under one-third, from 38% in the previous quarter. Clearly, the launch of the iPhone 5S and 5C helped Apple sales in the quarter.”

While Apple executives weren’t exactly satisfied with the performance of the iPhone 5c, CIRP’s findings show that Apple’s US market share has rebounded thanks to the two iPhone launches.