Apple has sold a record 51 million iPhones, and Samsung has sold even more, 86 million smartphones, during the past three months. It’s not a question of how many high-end devices Samsung has sold. It’s a fact: The smartphone market is a two-horse race between the Cupertino and South Korean companies. Yet the thing is, smaller Asian smartphone OEMs are starting to close the gap, at least according to IDC and Strategy Analytics (via the Wall Street Journal and Reuters).

The two market research companies released similar numbers: Data from IDC puts Apple and Samsung’s market share at 47%, while Strategy Analytics’ data says 48%. Both show a slight drop compared to a year prior.

But when comparing the two companies’ sales, the balance obviously favours Samsung: 86 million Android smartphones account for nearly 30% of the global smartphone market, while Apple’s 51 million account for 17.6%, according to Strategy Analytics.

As the latest numbers show, the smartphone market is growing, and it isn’t the high-end devices that are pushing it forward, but the cheap handset. Oh, and IDC says the demand is for bigger-screen, low-cost devices, corroborating an earlier Bloomberg report.

And this isn’t what Apple wants to hear right now. Or maybe it does? Any denial of a larger-screen iPhone coming from Apple has the typical “people love surprises” stamp on it, so you should treat it that way. 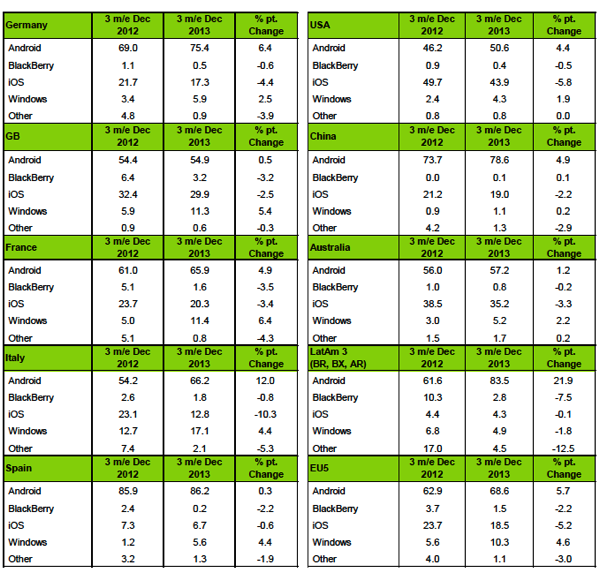 Still, another study of the holiday quarter, signed by Kantar Worldpanel ComTech a couple of days ago, says that Apple has a strong grip on the US smartphone market, although the 43.9% is lower compared to the same period a year prior. A possible reason: People love “full” releases, and the iPhone 5s isn’t one, nor is the iPhone 5c.