When Apple introduced the 9.7-inch iPad Pro, it highlighted a few notable changes regarding the user experience, such as increased brightness, wider colour gamut, lower reflectivity, and the new True Tone display technology. But how does the device’s display really perform? Dr. Raymond M. Soneira of DisplayMate has performed an in-depth analysis of the display and was impressed by the progress Apple has made with the 9.7-inch iPad Pro . . .

As he notes in his usual display shootout report published today, at first glance the latest iPad looks almost indistinguishable from the iPad Air 2 (2014), but after putting them side by side, the only similarities are that the displays have the same size and pixel resolution. In fact, he has concluded that the iPad Pro’s display is the best mobile LCD display he has ever tested. 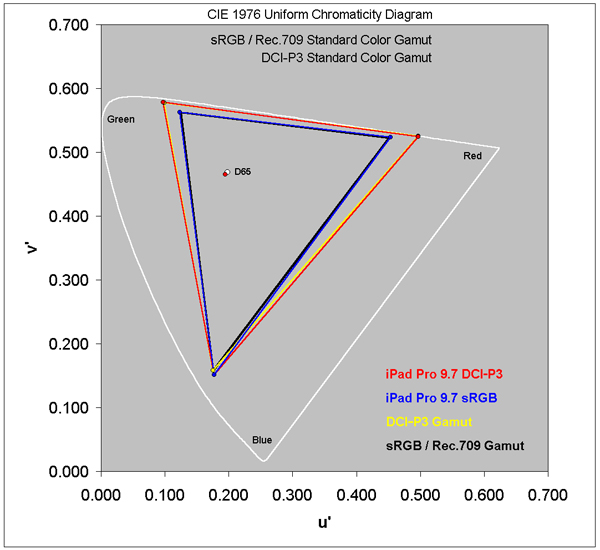 Here is why. The 9.7-inch iPad Pro incorporates two standard Color Gamuts: the new DCI-P3 Wide Color Gamut, which is used in 4K UHD TVs and Digital Cinema, and [insert the other gamut here]. Both Gamuts have been “implemented with colour accuracy that is visually indistinguishable from perfect.”

The smaller iPad Pro is 20% brighter than all other (currently available) iPads, and also the brightest full-size tablet he has ever seen. It also comes with the lowest screen Reflectance of any mobile display.

As measured by DisplayMate, the Peak Brightness for the 9.7-inch iPad Pro is 511 cd/m2 (nits). It also has a screen that reflects just 1.7% of the ambient light, thanks to the new Anti-Reflection (AR) coating.

You can read other tidbits about the 9.7-inch iPad Pro display here.