According to a new report by CNET, Adobe Systems is working on a new app that would bring high-end photo editing capability to popular tablets. It is believed that the app would feature photo editing controls like Adobe’s Lightroom software for PCs and serve as a “cloud-connected companion to the program”. 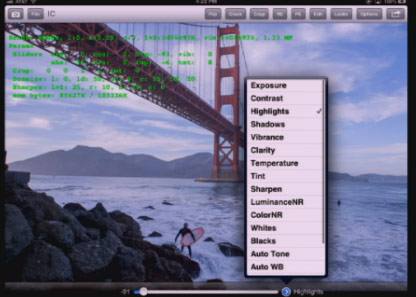 Adobe’s group product manager for Lightroom Tom Hogarty demonstrated an early prototype version of the app in an online show named ‘The Grid‘.  Hogarty said that the company has done a tremendous job with “PC-centric photography software”, but now it needs to incorporate Internet connectivity and mobile devices into photo editing as well. “We need to take that story beyond the desktop. We haven’t done a great job of it yet,” he added.

Tom demonstrated the following features of the prototype software running on an iPad:

• The ability to edit photos taken in raw photo formats, including Lightroom develop-module parameters like exposure, clarity, shadows, highlights, and white balance.
• Cloud-synchronized editing so that changes made on a tablet arrive on the same photo on the PC.
• The ability to zoom all the way to 100 percent for checking photo focus and details

And without promising anything, he said he’d like to see some of Lightroom’s library-module features, like sorting photos into categories or flagging picks and rejects, in the app.

“I spend couple hours computing on the train,” he said “I’d love to be able to sort and select images.”

There is no official word from Adobe as to when the app would ship or what exactly it would do. On asking, Hogarty joked: “The engineers are going to kill me. I’m going to get voted off the island.”