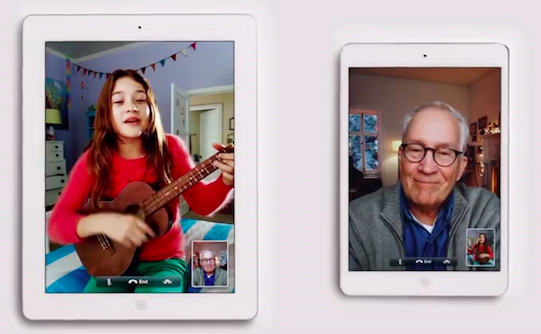 Apple has aired a new holiday-themed TV ad showcasing FaceTime on the new iPad mini. A grand daughter plays her ukelele singing “I’ll be home for Christmas”, Bing Crosby’s 1943 hit, for her grandfather. The commercial shows the regular iPad next to the iPad mini.

A girl and her grandfather share a moment of holiday cheer over FaceTime.

A couple years back, Apple also aired another holiday TV ad showcasing FaceTime on the iPhone 4 titled “Under the covers”.

Now that’s a simple, yet effective ad to show off FaceTime.