If you have ever travelled to Dubai, then you have seen the iconic 7-star hotel the Burj Al Arab. Designed to look like a flag sail, this hotel sits on a man-made island almost 250 metres off the Jumeirah coast.

The hotel announced (via Redmond Pie) it now offers custom-designed 24-carat gold plated iPads for its guests to use during their stay, to act as a virtual concierge to access services like private dining and housekeeping, noted management to The National:

The iPads were made by Gold & Co London, described as “the ultimate in luxury accessories” by chief executive Amjad Ali. The iPads are 64GB models with 4G connectivity and will be available for sale soon in the hotel’s gift shop with a price tag of 37,490 AED, or $10,448 Canadian dollars. 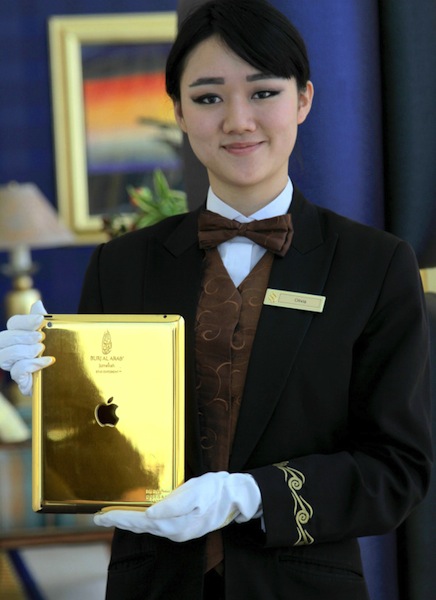 Having visited Dubai before and dined at Al Muntaha (on the 27th floor) for Friday Brunch at the Burj Al Arab, this hotel is the real deal when it comes to the ultimate in hotel luxury. If only guests could keep the gold iPads, but unfortunately that is not the case as they are required to be returned at the end of your stay.

Check out this documentary on the hotel below: