Earlier this week, a 5-year old girl named Charlie was waiting for her school bus on the sidewalk, outside her home near Wellesley and Parliament streets in Toronto, when it was stolen right out of her hands.

Charlie’s mother said her daughter, who relies on the iPad to communicate because of her severe autism, was devastated, reports 680 News.

“I wanted to chase after him, but I obviously didn’t. My daughter’s mittens had fallen off and she was really upset so I just ran over to her.”

“She waits for the bus and I turned around and he was just running and she was reaching out, her one mitten had fallen off,”

The iPad in a pink cover was decorated with stickers from the Disney movie Frozen, and was Charlie’s ‘bus buddy’, besides her communication tool. Once the iPad was gone, Charlie started to go on the bus with her My Pal Scout toy dog instead.

Sarah pleaded on CityNews to ask for the iPad to be returned to her daughter as it meant everything to her, even going so far to say it was okay to have it thrown over the fence, as long as it made its way home.

CityNews noted it received massive support for people wanting to help, and one viewer (who asked to remain anonymous) dropped off a new replacement iPad for CityNews reporter Anna Vlachos to give to Charlie. 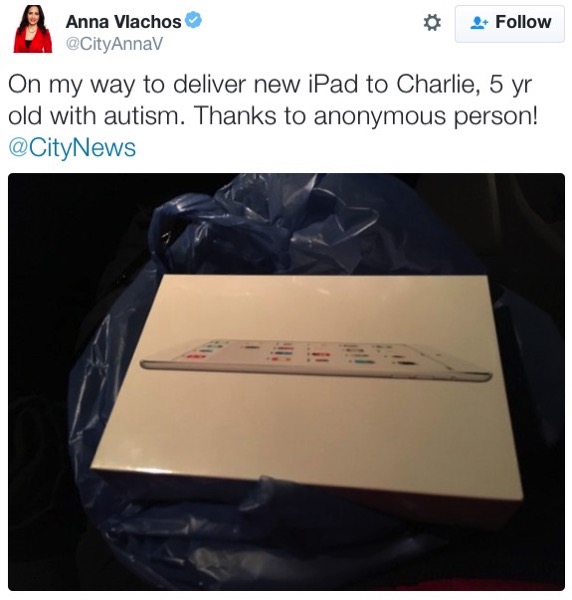 Charlie’s mother described the iPad thief as “kid” aged 15 to 17 years old, and was wearing a Canada Goose jacket and cargo-coloured pants at the time.