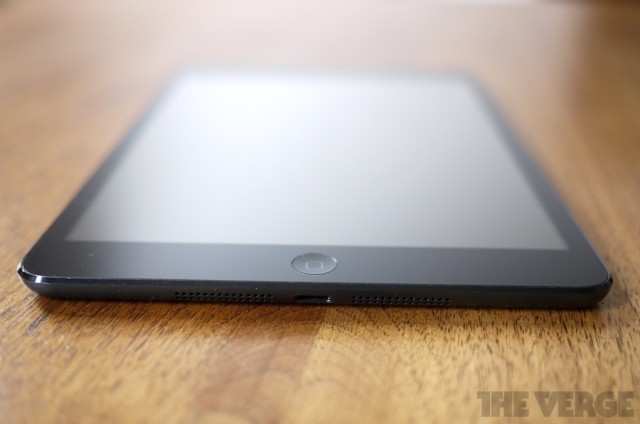 Yesterday’s round up of iPad mini reviews revealed the iPad mini does indeed have stereo speakers, as noted in reviews from The Verge:

All of the standard iPad button and switch placement is intact here, save for the move of the speaker grille to the bottom of the device (it’s been around back for iPads previous to this version), along with the new Lightning port. And that’s a good-sounding set of stereo speakers, by the way.

…and Engadget (which mistakenly noted the speaker was mono):

Update: This review originally stated (as does Apple’s spec page) that the iPad mini has a mono speaker. It is, in fact, a stereo device.

That iPad mini spec page Engadget refers to only lists “Built-in speaker” which has led to some confusion:

Earlier this morning we retweeted Joshua Topolosky’s double confirmation of stereo speakers–he notes sound comes out of two separate locations on the bottom of the device:

People of Earth: Apple confirms iPad mini has STEREO SPEAKERS. As I note in my review.

@bingmobo Yes. At least, it's able to output sound from two separate locations on the bottom of the device. You do the math!

Earlier today, a 9to5Mac reader claimed Phil Schiller confirmed the stereo speakers with an email reply of “It is stereo”. Further confusion comes from Amazon’s recent homepage ad that pitted the Kindle Fire HD versus the iPad mini and listed the latter had a mono speaker. That ad has since been removed from Amazon.com’s homepage.