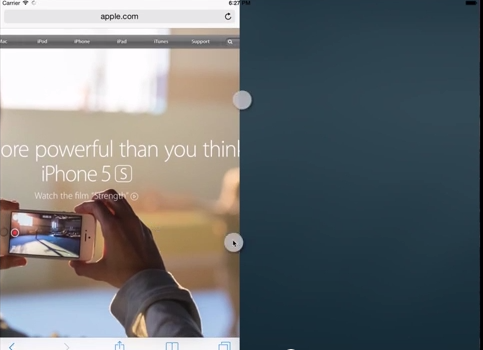 A couple days ago developer Steve Troughton-Smith discovered hidden code references within iOS 8 to enable split-screen multitasking on the iPad. Apple was said to release the feature at WWDC 2014 but the feature didn’t make the cut as it was reported to still be under development.

Earlier this evening Troughton-Smith posted a video to Twitter demonstrating the split-screen multitasking feature and the gestures available to resize an iPad screen to show apps running side-by-side, in either 1/4 size, 1/2 size or 3/4 size. As for the keyboard during the screen resize, the developer says it stays full size.

Troughton-Smith responded to comments on Twitter with “this amount of code throughout the OS doesn’t make it to production by accident. I imagine they’re saving it for the iPad event.”

We’ll never truly know if Apple will bring split-screen multitasking to life but this evidence definitely makes people believe it will happen at some point in the near future.

Apple’s Stage Manager multitasking feature in iPadOS 16 is only for tablets with the company’s M1 chip, but that is now changing. According to Engadget, Apple told the publication Stage Manager is now expanding to older iPad Pro 3rd gen and 4th gen models when iPadOS 16 is released later this year. M1 iPad Pro […]
Gary Ng
14 hours ago