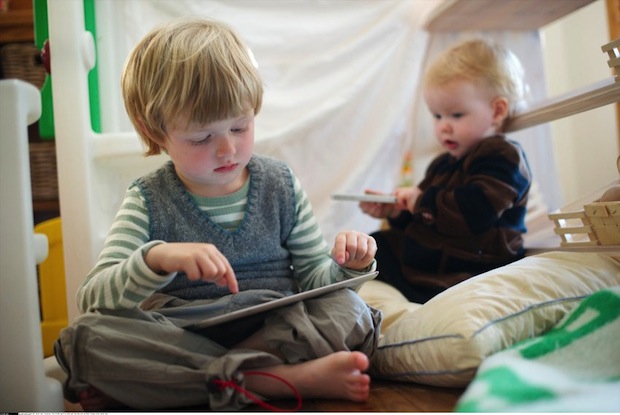 Eleven Dutch “Steve Jobs schools” opening in August for about 1,000 children aged between four and twelve have decided to take the Apple “Think Different” slogan literarily: they have decided to ditch blackboards, chalk, classrooms, and everything resembling the usual school setup, and to use iPads instead.

There will be no blackboards, chalk or classrooms, homeroom teachers, formal classes, lesson plans, seating charts, pens, teachers teaching from the front of the room, schedules, parent-teacher meetings, grades, recess bells, fixed school days and school vacations. If a child would rather play on his or her iPad instead of learning, it’ll be okay. And the children will choose what they wish to learn based on what they happen to be curious about, the Spiegel reports (via AppleInsider).

Teachers, however, will remain, but instead of sharing knowledge, they will play the role of a “learning coach”. The children will enjoy 100% freedom to do whatever they are interested in, and will be allowed to play with their iPads if they aren’t in the mood for learning. Also, it will be okay for them to choose what they wish to learn based on what they happen to be curious about.

What sounds like science fiction now (as of writing this article on July 2, 2013), will be pretty normal in 2020, claims Getjan Kleinpaste, the 53-year-old principal of the Breda-based school that has joined the program.

Last year, he was still the principal of a school that had precisely three computers, which he found frustrating. “It was no longer in keeping with the times,” he says. Soon, however, Kleinpaste will be a member of the digital avant-garde. He is convinced that “what we are doing will seem pretty normal in 2020.”

The Steve Jobs schools will be open between 7.30 a.m. and 6.30 p.m. on workdays, with the children allowed to come and go as they please. The only condition is to be present for the core-activity period between 10.30 a.m. and 3.00 p.m. The core activities will be arithmetic, reading skills, and text comprehension, while good handwriting has been downgraded to a secondary skill.

How does this sound to you? Would you like to have Steve Jobs schools in Canada as well?