iPad Air 5 vs iPad Air 4: What are the Differences? 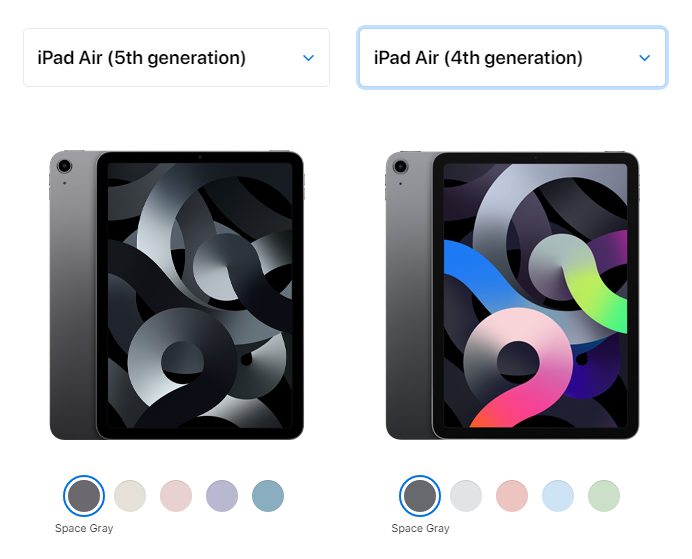 At Tuesday’s ‘Peek Performance’ event, Apple unveiled the 5th-generation iPad Air — a direct successor to the iPad Air 4 from 2020 that ditches Apple’s A-series iPhone chips for the company’s very first custom silicon for desktop — the M1.

Apple says the new iPad Air is “the most powerful and versatile iPad Air ever.” Let’s take a look at the differences between the 2022 iPad Air and its predecessor…

The iPad Air 5 comes in Space Gray, Starlight, Pink, Purple, and a new shade of Blue.

The iPad Air 4, on the other hand, was available in Space Gray, Silver, Rose Gold, Sky Blue, and Green.

The iPad Air 5 and its predecessor share the same rear camera setup, with the newer model adding an extended dynamic range feature for video recording up to 30 fps.

The front camera is where the iPad Air 5 gets a major upgrade. While the iPad Air 4 came with a FaceTime HD camera on the front, its successor gets a new 12 MP Ultra Wide front camera with an ƒ/2.4 aperture, 2x zoom out, and support for Center Stage.

While the 2020 iPad Air was powered by the same A14 Bionic chipset as the iPhone 12 lineup, the 2022 iPad Air makes a giant leap forward in processing power with the desktop-grade M1 chip.

M1 equips the iPad Air with a powerful 8-core CPU, 8-core GPU, and 8GB of RAM for unrivalled performance.

The new iPad Air is only the second iPad ever to come with an M1 chip under the hood, following in the footsteps of last year’s iPad Pro.

Both iPad Air models sport a USB-C port, but Apple says the USB-C port on the new iPad Air supports up to 2x faster transfer speeds.

Both the 2020 iPad Air and the 2022 iPad Air have Touch ID sensors embedded in the Power button at the top.

Both models feature a two-speaker stereo setup in landscape mode.

The new iPad Air and its predecessor are both compatible with the 2nd generation Apple Pencil. Both tablets also support Apple’s Magic Keyboard accessory for iPads, as well as the Smart Keyboard Folio.

The iPad Air 5 and iPad Air 4 both feature Wi-Fi 6 up to 1.2 Gbps. The 2022 iPad Air brings a pretty significant networking update with the addition of 5G capability.

The iPad 5 and the iPad 4 are very similar in design, with almost identical shells. The bulk of the improvements and upgrades the iPad 5 brings are on the inside, most notably the new M1 processor.

The 2022 iPad Air sticks to the same internal storage configurations as its predecessor: 64 GB and 256 GB, available in both Wi-Fi only and Wi-Fi + Cellular variants.

iPad Air 5 vs iPad Air 4: Which One Should You Buy?

If that’s a question you find yourself asking after Apple’s ‘Peek Performance’ live event, you don’t really have another option — the iPad Air 4 was discontinued (at least officially) as soon Apple announced the 5th-generation iPad Air.

If you’re thinking about buying a new iPad Air or upgrading from an older one, though, the new iPad Air is definitely the way to go. The M1 chip is a tremendous advancement for performance and efficiency on the iPad — the new hardware is so performant that it practically beckons Apple’s iPadOS to catch up to its capabilities.