John Poole from Primate Labs has noted the first iPad Air Geekbench 3 results have started to appear in the Geekbench Browser. The results reveal at both single-core and multi-core performance, the iPad Air produces the highest results in both categories, making it the fastest iOS device: 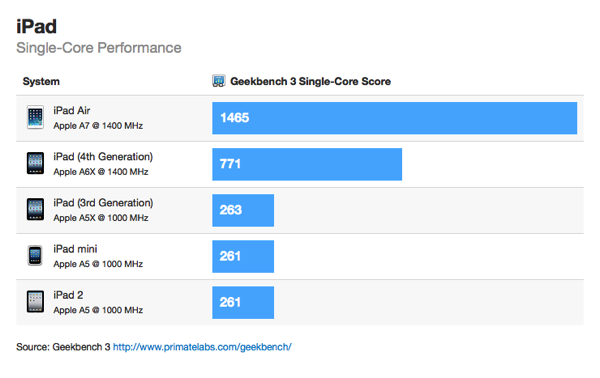 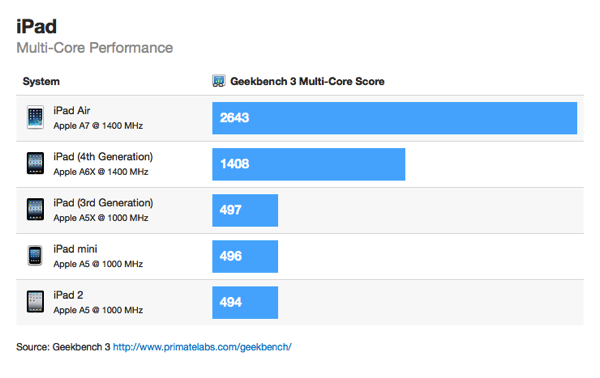 Poole says he is unaware of reasons why the iPad Air A7 is running at 1.4 GHz, clocked faster than the iPhone 5s A7 at 1.3 GHz:

In John Gruber’s review of the iPad Air, he similarly noted the same Geekbench results, with the iPad Air A7 running at 1.39 GHz versus the iPhone 5s A7 at $1.29 GHz.

At just $100 more, the iPad Air is over 5x faster than the $399 iPad 2. Poole questions which market Apple is targeting. We suspect this ‘lower end’ market could be schools or people who need a full-sized to do basic operations (i.e. iPad cash register), rather than run games, process video or do large tasks.

You can check out a full roundup of initial iPad Air reviews here. The iPad Air launches on November 1, with online sales expected to take place at 12:01AM PDT, while Apple retail stores will open at 8AM local time.